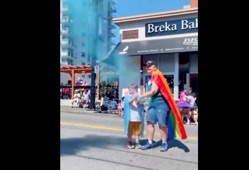 Just imagine how much pain and confusion is being sown at such a young age. It is just unbelievably heartbreaking.

BCN Editor's Note: As a young child I was definitely a "tomboy" in that I loved climbing trees, playing with trucks and trains and my "astronaut GI Joe doll" (with the space capsule). I also loved playing and watching baseball and went to many a Mets game with my dad. I THANK GOD my parents didn't see this NORMAL childhood behavior as a sign I needed to "transition to being a boy". My heart is broken for these children who are being robbed of their childhoods (not to mention their entire normal lives) by those who would push a demented agenda and toxic ideology over the wellbeing of an innocent generation which, at whose age, is incapable of understanding the consequences of such a lie. -Aimee Herd, Breaking Christian News

(Canada) â [LifeSiteNews.com] At Vancouver's Pride Parade on July 31, a preschooler walking with her grandmother fired a blue gender reveal cannon to announce that she would be transitioning to male. (Screengrab image)

"Charlie Danger" Lloyd is a little girl from British Columbia, Canada. She is only four years old. Four-year-olds are not capable of understanding many things. If I subscribed to transgender ideology's bifurcation of sex and genderâand I do notâI would still be entirely confident that a preschooler could not understand it. Preschoolers also do not have the self-awareness to declare that, based on their years of understanding and experience, they have been born into the wrong body.

But it is 2022, and Lloyd's mother confirmed her desire to be a boy. Lloydâthe preschoolerâuses "he/him" pronouns (have you ever met a preschooler who knew what a pronoun was?) and was apparently thrilled to make the transition announcement at Pride (this was obviously Lloyd's idea). AccordingÂ to Lloyd's mother:Â

Once they closed the road, Charlie strutted out with Grammy and they faced the sidelines and after a short struggle, the cannon exploded with blue smoke and biodegradable confetti. Charlie jumped with joy as the crowd cheered him on. He couldn't believe the love and support he was shown from the bystanders.

Lloyd's mother says the preschooler has wanted to be a boy since the age of two. She also says the gender cannon reveal at Vancouver Pride Parade was all Lloyd's idea, and that the reason she and others knew Lloyd was a boy is that as a toddler she often said she wanted to look "just like daddy" and insisted she was a boy. "He wasn't your typical little girl. He would play with other boys and the parents would say he was more of a boy than their own children," she said.

At preschool, staff and other preschoolers congratulated Lloyd when she shifted to he/him pronounsâthe transition, says Lloyd's mother, apparently began several months ago. The tipping point wasn't just the playing with boys and the tomboy behavior, but the fact that she wanted her hair cut short... Subscribe for free to Breaking Christian News here