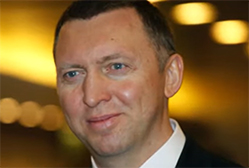 [PJ Media] -- Charles McGonigal — The former FBI agent who led the Trump-Russia investigation — has been arrested for "agreeing to provide services" to the billionaire Russian oligarch Oleg Deripaska. (Screengrab Image)

Sergey Shestakov, a former Soviet, then Russian diplomat, now an American citizen, was arrested as well.

The two men are charged with trying to have Deripaska removed from the U.S. sanctions list.

"Both previously worked with Deripaska to attempt to have his sanctions removed, and, as public servants, they should have known better," Damian Williams, U.S. Attorney for the Southern District of New York, claimed in a statement. "This Office will continue to prosecute those who violate U.S. sanctions enacted in response to Russian belligerence in Ukraine in order to line their own pockets."

Charges against both men include:

Each of these counts carries a maximum sentence of 20 years in a federal hoosegow. Shestakov was also charged with one count of lying to the FBI, which could snag him a maximum of five additional years.