"If Secretary Mayorkas was in charge of any company, he would've been fired by now for the failures of what he has caused. The American public deserve more, deserve better, and expect more within their government. Enough is enough. We will do whatever it takes. This is my commitment—to the men and women of the Border Patrol, and to the citizens of the United States." -Kevin McCarthy, House Republican Leader 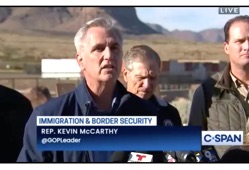 [CNSNews.com] Homeland Security Secretary Alejandro Mayorkas should resign, or face the possibility of an impeachment inquiry next year over the crisis on the US-Mexico border, House Republican Leader Kevin McCarthy said on Tuesday. (Screengrab image)

"Our country may never recover from Secretary Mayorkas' dereliction of duty," McCarthy (R-CA) told reporters during a visit to El Paso, Texas.

"He cannot and must not remain in that position. If Secretary Mayorkas does not resign, House Republicans will investigate every order, every action, and every failure will determine whether we can begin impeachment inquiry."

McCarthy, who has been nominated by the Republican conference to serve as Speaker in the next Congress, said in response to a question that if Mayorkas doesn't resign the probe would begin on January 3.

"If Secretary Mayorkas was in charge of any company, he would've been fired by now for the failures of what he has caused," McCarthy said.

"The American public deserve more, deserve better, and expect more within their government. Enough is enough," he said. "We will do whatever it takes. This is my commitment—to the men and women of the Border Patrol, and to the citizens of the United States."

In a statement later, the Department of Homeland Security said it would "continue our work to enforce our laws and secure our border, while building a safe, orderly, and humane immigration system."

"Members of Congress can do better than point the finger at someone else; they should come to the table and work on solutions for our broken system and outdated laws, which have not been overhauled in over 40 years," the DHS said.

McCarthy and other Republicans who visited the border drew attention to what McCarthy called "the greatest wave of illegal immigration in recorded history," to the arrival of individuals on the terrorist watch list, to the violence, rapes, and human trafficking taking place, and to the inflow of deadly fentanyl.

"It's the equivalent of an airline crashing each and every day in America," McCarthy said of the 300 Americans on average who die of drug overdoses every day. "If an airline crashed three days in a row the entire nation would say, we have a real challenge. We have a crisis. We have a disaster, we have to do something about it."

McCarthy and other lawmakers accused Mayorkas of lying to the American people, by denying that there is a crisis, and testifying that the border is secure.

Focusing on the terror watchlist concerns, Rep. August Pfluger (R-TX) recalled the 9/11 Commission report's reference to the system "flashing red" due to terror threat warnings in the lead-up to the Sept. 11, 2001 terrorist attacks.

(The report in fact quoted then-CIA Director George Tenet as telling the commission that "the system was blinking red.")

He said House Republicans were mocked by Democrats when during a visit to El Paso last year they "uncovered the fact that we had dozens of known or suspected terrorists who were entering this country."

"And now that number is over 100. And yet we were mocked. The system was indeed flashing red and it still is."

"He laughed. He laughed at me and he laughed at others on the committee and asserted that the border was secure, that we had 'operational control' of the border—which is completely false."

In his press conference remarks Rep. Dan Crenshaw (R-TX) referred both to the terror watchlist concerns and to the presence and activities of criminal gangs.

"Across the river sit some of the most capable, best equipped, best funded and most ruthless and dangerous organizations in the world, the cartels," he said. "This is more than an immigration crisis; it's a national security crisis."

In the summer of 2021, Rep. Andy Biggs (R-AZ) introduced a resolution to impeach Mayorkas, accusing him of having "presided over a reckless abandonment of border security and immigration enforcement," and "failing to maintain operational control of the border and releasing hundreds of thousands of illegal aliens into the interior of the United States."

The measure, which attracted 32 Republican co-sponsors but did not advance after referral to the House Judiciary Committee, said Mayorkas' policies had also "led to a significant increase in illegal drug smuggling across the southern border." Subscribe for free to Breaking Christian News here