YouTube May Have Yanked New Italian PM's Viral Speech, but This One's Just as Good

"...So-called Progressives use the power and the arrogance of their mainstream media to force their political opponents to change ... They will try to take everything away from us, but they can't take away who we are ... We are proud of our identities, of what we stand for ... and we know that our adversaries are operating globally, applying the same tactics and the same ideology to destroy our identities and what makes us who we really are ... And you know what? Cherishing who we are, knowing what we stand for, is all we need to face this challenge. Do not fear the truth, my friends." -Giorgia Meloni, from her speech at CPAC, 2022 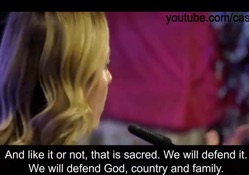 [PJMedia.com] Italy's newly elected Prime Minister Giorgia Meloni is a traditional, patriotic conservativeâwhat "...Biden" and the Globalists refer to as a "far-right extremist fascist." She's also a particularly effective speaker with a gift for concisely laying out what conservatives the world over stand for and what we're up against. So naturally, when clips from a 2019 speech Meloni gave at the World Congress of Families began to go viral after she won her election, YouTube discovered reasons why they suddenly needed to boot it off their platform.Â Breitbart reportedÂ on Wednesday: (Screengrab image)

Google-owned YouTube removed the video of a 2019 speech from incoming Prime Minister of Italy Giorgia Meloni which had been going viral across numerous platforms. The internet giant claims the video "breached" its community guidelines, a transgression that apparently took several years and a successful election for it to notice.

One of the surviving clips on Twitter gives a sample of Meloni's powerful speechâand shows why Globalists despise and fear her message: Click Here to Watch

Luckily, Meloni fans and the Meloni-curious can enjoy another fiery stemwinder from the Italian leader on the CPAC website. Meloni traveled to the United States to speak at the annual conservative conference in 2019 and again in 2022.

In February 2022, Meloni kicked off her CPAC speech with a discussion of Russia's invasion of Ukraine, which had just begun. She said she came to CPAC because it was important to stand together with another nationâthe United Statesâin support of freedom.

"We are on the side of international law. We are on the side of freedom. And indeed, we are on the side of, of a proud nation that is teaching the world what it means to fight for freedom," proclaimed Meloni. She declared that "without the outrageous withdrawal of troops from Kabul yesterday, we would have never seen the tragic siege of Kyiv today. And certainly," she added, "no one would be preparing to see Taiwan occupied tomorrow."

Meloni leveled well-deserved criticism at Joe Biden. "For in foreign policy, when it comes to defending strategic interests and core values, a display of weakness is not an option." She then quoted the ancient Romans in melodic, Italianate Latin then English: "If you want peace, prepare for war."

Meloni led the charge in defense of the Western world. "We live in a time in which everything we stand for is under attack," she averredâindividual freedom, rights, national sovereignty, the prosperity and wellbeing of the family, and the education of children. And she declared that the only true rebels are those who preserve their identity, who are conservative... Subscribe for free to Breaking Christian News here