"We could see a situation where we have Cat 4 storm surge and potentially a Cat 1 or 2 hurricane landfall." -Kevin Guthrie with Florida's Division of Emergency Management 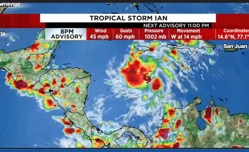 [CBN News] From the Panhandle to Miami, Floridians are not taking any chances ahead of Hurricane Ian's arrival. (Screengrab image)

"Be prepared now, take a look at your plans know where you're going and how to keep your family safe," said Tim Dudley Jr., with Hillsborough County Emergency Management.

With the looming threat of Ian to the Sunshine state, Gov. Ron DeSantis is activating 2,500 National Guardsmen and declaring a state of emergency.

"It's important to point out to folks that the path of this is still uncertain," said DeSantis. "The impacts will be broad throughout the state of Florida."

Authorities are telling residents to expect heavy rain across the state with high winds and storm surge.

"We could see a situation where we have Cat 4 storm surge and potentially a Cat 1 or 2 hurricane landfall," said Kevin Guthrie with Florida's Division of Emergency Management.

Across the Pacific, scenes of devastation are being seen in northern Philippines as the most powerful typhoon this year slammed into the country over the weekend, knocking out power in two entire provinces, causing widespread flooding, forcing officials to suspend classes and government work in the capital and other areas, and leaving at least six dead, including five rescuers who were using a boat to help people trapped by floodwaters.

Nearly one and a half million people are still without electricity.

"My home does not have any electricity, I don't have any water," said Pastor Giovanni, a local church leader.

Disaster teams from Operation Blessing have been on the ground delivering food and water. They visited several communities and churches, distributing rechargeable solar lamps and Aqua Tabs.

The tablets purify water, giving residents clean water to drink and cook with.

"That is exactly what we need now in this time where there are so many people with fear and anxiety," said Giovanni. "We feel blessed that we have Operation Blessing here because we know their heart." Subscribe for free to Breaking Christian News here