New York Hospital Accused of Normalizing Myocarditis in New Ad Featuring Young Girl; No Mention of the Cause

"Why would anyone try to normalize myocarditis?..." -Dr. Vinay Prasad, a professor at UC San Francisco 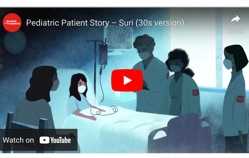 [LifeSiteNews.com] New York Presbyterian Hospital released an ad in early September portraying a young girl as being diagnosed with and suffering from myocarditis, a cardiac ailment associated with COVID vaccination in youth. (Screengrab image)

The ad shows the young girl gazing at a window display in a clothing store and daydreaming about fashion design.

In the ad, she goes on to say, "One day I had a stomachache so bad I didn't want to do anything the team at New York presbyterian said it was actually my heart, it was severely, swollen something called myocarditis."

The ad concluded by saying that the doctors gave her medicines "and used machines to control my heartbeat" and saved the girl from a fatal outcome.

The ad did not mention any cause for the potentially fatal heart condition.

Dr. Vinay Prasad, a professor at UC San Francisco, retweeted the ad linking the proliferation of myocarditis in children to vaccination: "Why would anyone try to normalize myocarditis, when it is easy to try to reduce it? Lower doses. Space out doses. No moderna & Fewer doses in young men. Exemptions for future doses for people who already had COVID19"... Subscribe for free to Breaking Christian News here