"It is important to note that not one of the senators listed in the letter condemned actual violence and vandalism against pregnancy help centers this summer. Instead, they've spent their time fabricating a narrative on unfounded speculation. Rather than finding ways to help women be able to choose something besides abortion, they have used their political powers to bully those who are helping women make life-affirming choices." -Heartbeat International CEO Jor-El Godsey 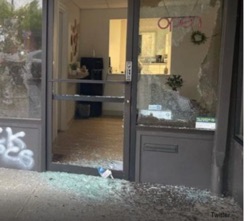 [DailySignal.com] Vandals have targeted about 70 pro-life pregnancy resource centers since the leak of the Supreme Court's draft decision in Dobbs v. Jackson Women's Health Organization, the case that overruled Roe v. Wade, but Senate Democrats have unleashed their own attack on these pro-life centers, demonizing them as potential "surveillance infrastructure" to power "pregnancy- and abortion-related prosecutions." (Screengrab image)

The letter insinuates that Heartbeat International might be using the data to target women and their health care providers for prosecution under laws restricting abortion.

The Democrats cite a report from The Alliance: State Advocates for Women's Rights and Gender Equality, which suggests the crisis pregnancy center "industry is now functioning as surveillance infrastructure for the anti-abortion movement, amassing data that could be used in pregnancy- and abortion-related prosecutions post-Roe."

"Heartbeat International—which is explicitly opposed to abortion rights—appears to be in a position to collect a significant amount of personal information from women about their pregnancies and potential plans for managing their care, but it is not under any legal obligation to maintain the confidentiality of this information, or keep it out of the hands of abortion bounty hunters," the senators wrote.

The "bounty hunter" phrase is a derisive reference to Texas' 2021 abortion law, which allows private individuals to bring lawsuits in state court against people who allegedly perform or abet certain abortions, offering a reward for successful suits.

The senators accuse Heartbeat International of "luring pregnant people ... to affiliate [crisis pregnancy center] facilities by using a variety of false and misleading tactics," such as suggesting that these pro-life centers provide "legitimate abortion and reproductive health care services" when they ostensibly do not. (Note the use of "pregnant people" there and the avoidance of the now supposedly offensive term "woman.")

While the roughly 3,000 pregnancy resource centers across the US do not offer abortion, they do provide various services, such as pregnancy tests, counseling on available options (including parenting, adoption, and abortion), ultrasounds, testing and treatment for sexually transmitted diseases, classes on prenatal care and parenting, maternal assistance with things such as diapers and baby clothes, post-abortion support, medical referrals, and more.

Over a five-year period beginning in 2016, pregnancy resource centers reportedly saved an estimated 828,131 lives, and in 2019 alone, they served almost 2 million people.

Vandals, many of whom are apparently associated with the group Jane's Revenge, have carried out 70 attacks on these centers since May 3, according to Catholic Vote. Vandals have broken windows, sprayed graffiti reading "If abortion isn't safe, you aren't either," and set fire to some of the centers.

The Democrats' letter acknowledges that Heartbeat International and its affiliate pregnancy resource centers "claim to adhere to [federal regulations] to protect patients' health information," but it claims that the organization is not required to follow the federal law and does not disclose how it uses the data.

In a statement sent to The Daily Signal Tuesday, Godsey condemned the letter as "naked politics intended not to help women, but to influence elections."

"It is clearly a stunt designed to appease Big Abortion power brokers," he said.

"It is important to note that not one of the senators listed in the letter condemned actual violence and vandalism against pregnancy help centers this summer," Godsey added. "Instead, they've spent their time fabricating a narrative on unfounded speculation. Rather than finding ways to help women be able to choose something besides abortion, they have used their political powers to bully those who are helping women make life-affirming choices."

Indeed, none of the signatories to the letter—Booker, Sanders, and Warren, along with Democratic Sens. Mazie Hirono of Hawaii, Ron Wyden of Oregon, Ed Markey of Massachusetts, and Richard Blumenthal of Connecticut—responded to The Daily Signal's request for comment on the attacks against pro-life pregnancy resource centers by the time of publication.

"What we do is safe, secure, and legal," Godsey said. "Heartbeat has been providing help for more than 50 years and never once did we receive any of these questions or concerns until recently, and then from those with a clear abortion agenda. It's politics, and we regret only that it's a distraction to our important work of helping women find alternatives to abortion."

"It's bizarre that this bothers the likes of Elizabeth Warren so much," O'Connor noted. "She says she is 'pro-choice,' but, really, she is just about one choice: abortion. If she really cared about women, she would be condemning the violence against life-affirming pregnancy centers, not trying to shutter their doors."

"Life-affirming pregnancy centers keep all medical records confidential and secure per [the Health Insurance Portability and Accountability Act], state medical record privacy laws, and standards in the medical profession," O'Connor added. "Privacy and security of medical records is standard in the health industry, and life-affirming pregnancy centers are no different. Interestingly, Warren has not cited one incident supporting her outrageous claim that centers don't protect their patients' privacy."

O'Connor characterized that omission as "proof that she is fabricating this false idea to promote her radical pro-abortion agenda."

Connor Semelsberger, director of federal affairs for life and human dignity at the Family Research Council, compared the Democrats' letter to the demonization tactics of the Southern Poverty Law Center.

As I documented in my book "Making Hate Pay: The Corruption of the Southern Poverty Law Center," the center condemns conservative nonprofits like the Family Research Council as "hate groups," placing them on a map alongside the Ku Klux Klan.

"We here at Family Research Council have been tracking not just attacks on pregnancy centers, but on churches as well, and to see the violent rise in damaging buildings and vandalism," Semelsberger told The Daily Signal. He said the Democratic senators' letter is "likely to increase attacks" against pregnancy resource centers.

"When an organization is painted in a negative light in this way as if they are doing something morally wrong or evil, that can paint a target on its back," he added. "We at [the Family Research Council] know that particularly well. We saw a violent attack in our own building 10 years ago directly related to the Southern Poverty Law Center attacking [our] work on marriage and religious freedom as something evil and to be shunned."

While the letter warns about women getting prosecuted, Semelsberger noted that "none of the laws on the books in any way, shape, or form criminalize a mother seeking an abortion."

Furthermore, he noted that crisis pregnancy centers have been collecting health information since 2017, and that up until June of this year, Roe v. Wade remained on the books, so "there was no enforcement" of the kind the Democrats suggest. "It would be very out of character to assume that this data that's been collected for five years is going to law enforcement," he said. Subscribe for free to Breaking Christian News here

Tyler O'Neil is managing editor of The Daily Signal and the author of "Making Hate Pay: The Corruption of the Southern Poverty Law Center."