"We had a very funny family. Laughs were very important to us," Michael Heaton said, explaining how laughs got the family through their mother's death when he was 14 and Patricia was 12. "Humor really ... helped us through it." 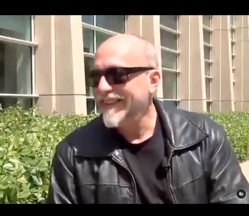 [Faithwire.com] "Everybody Loves Raymond" star Patricia Heaton shared a heartbreaking message on social media this week, reflecting on the death of her brother, Michael. (Screengrab image)

"I'm still processing the fact that I will never see or speak to my brother again in this lifetime," Heaton wrote.

Michael Heaton, 66, was a reporter, features writer, and columnist for The Plain Dealer, an Ohio newspaper. He penned the "Minister of Culture" column for over three decades and was well-known in the journalism space before his 2018 retirement.

Patricia Heaton, who is mourning this tragic loss, shared footage of a "beautiful interview" from 2012 that local outlet WEWS-TV conducted with her brother, whom she called a "very excellent human being."

In the TV exchange, Michael Heaton spoke about his famous sister, his work as a journalist, and their family dynamics growing up.

But he said he didn't quite see it as a bad thing.

"I got my own room, no hand-me-down clothes, and I dated all their friends," Michael joked.

The special sibling relationship between Patricia and Michael came through as he reflected on his sister, calling the actress a "heavy achiever" as a child—a person involved in multiple clubs who was always a "go-getter.

He also joked that he's responsible for her Hollywood career.

"I have to take credit for all of her success," he jested, explaining how he moved to New York City to work for People magazine, and Heaton later followed him.

After a visit to New York to see him one weekend, he said she went back to college and changed her major from journalism to drama.

As for his sister's monumental Hollywood success, he said he was "surprised and yet ... not surprised"... Subscribe for free to Breaking Christian News here