And unfortunately for taxpayers, Semelsberger pointed out, "Planned Parenthood doesn't get a single big check that's easy to track. Rather, it gets millions in in federal reimbursements through performing family planning services for Medicaid (a funding stream immediately reinstated by Joe Biden after taking office), which then frees up additional dollars that allows them to pay abortionists, pay for women's out-of-state travel for abortions, or donate money to pro-abortion politicians so that they can continue to receive a big subsidy from tax dollars." 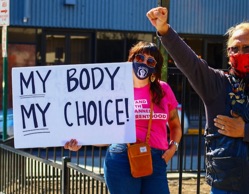 [WashingtonStand.com]  While the IRS bulks up to come after conservatives, another "nonprofit" is robbing taxpayers blind and then turning around and using its freed-up cash to influence elections. And yet, Planned Parenthood's racket never seems to raise an eyebrow in the federal government, which is apparently too busy harassing ministries who don't take a dime of taxpayer money. But now that America's biggest abortion business (and possibly the largest transgender hormone pusher) is announcing a $50 million dollar midterm election campaign, most Americans can't help but wonder: Where do the federal dollars end and the campaign checks begin? (Image: Unsplash-Manny Becerra)

Like a lot of extremists, Jenny Lawson, who heads up Planned Parenthood Votes, is desperately hoping abortion will "play a huge role in this election." In an interview with The Washington Post, the urgency felt real for the movement on the losing side of June's Dobbs ruling. "The stakes have truly, truly never been higher," Lawson warned. But the same could be said of her organization's financial stakes, which stand to take a huge hit if Republicans win big in the states this November.

"Planned Parenthood has been the kingmaker of the abortion industry," Family Research Council's Connor Semelsberger told The Washington Stand. "On one hand, it rakes in millions of dollars a year from American taxpayers, and on the other hand, it spends millions of dollars every year to elect radically pro-abortion politicians. The link between their political activity and pro-abortion government policies and their bottom line could not be clearer."

Questions about the group's money management have been swirling for years. It's one of the reasons that Donald Trump pulled the plug on the industry's millions in family planning dollars. To leaders dating back to Ronald Reagan, it was just too shady to send Title X dollars to the same businesses whose idea of "family planning" is abortion.

For groups like Planned Parenthood, it's always been a delicate dance. As most people know, it's illegal for the organization to use even a penny of federal funds on the group's political activities. And while their accountants perform all of the necessary tricks to keep the monies separate, there's no denying that Planned Parenthood has room to spend more politically because Congress rewards it financially.

And unfortunately for taxpayers, Semelsberger pointed out, "Planned Parenthood doesn't get a single big check that's easy to track. Rather, it gets millions in in federal reimbursements through performing family planning services for Medicaid (a funding stream immediately reinstated by Joe Biden after taking office), which then frees up additional dollars that allows them to pay abortionists, pay for women's out-of-state travel for abortions, or donate money to pro-abortion politicians so that they can continue to receive a big subsidy from tax dollars."

Of course, this you-scratch-my-back approach has been the group's playbook since Barack Obama. That's when the organization first launched a political action committee (PAC) aimed at keeping pro-lifers off Capitol Hill. When Obama was elected, Planned Parenthood got quite a return on its investment—hundreds of millions of dollars to fill its abortion-friendly coffers. Eight years later, the group was one of the first to endorse Hillary Clinton—and she returned the favor by promising to force taxpayers to bankroll abortion-on-demand. Unfortunately for Hillary, Americans lost their stomach for the kind of rabid agenda Clinton was pushing and elected Donald Trump instead.

Trump turned out to be the abortion industry's worst nightmare — spending four years making it easier for states to defund Planned Parenthood, stripping its global funding, appointing pro-life agency leaders, helping to protect the Hyde Amendment, and blowing a big hole in the industry's pot of family planning funds.

Most importantly, he nominated three originalist justices to the Supreme Court, who proved to be the tipping point for Roe v. Wade. Now, with the issue of abortion returning to the states, Planned Parenthood is stocking its war chest for at least nine midterm targets: Georgia, Nevada, Minnesota, Pennsylvania, Arizona, North Carolina, New Hampshire, Michigan, and Wisconsin. Their latest offensive, which they've dubbed Take Control, sets its sights on key "gubernatorial or down-ballot races [that] could determine abortion access in the states."

The $50 million dollar investment is Planned Parenthood's biggest—breaking its $45 million record in 2020 by a cool five million. But, as Biden's approval tanks, the cost of electing his party goes up.

But the Dobbs decision hasn't been all bad for business, Semelsberger points out. "Underneath it all, Planned Parenthood may be celebrating with joy the overturning of Roe v. Wade. They've used the Dobbs decision to radically increase private donations—and they've also received a huge boost in state and local funding from pro-abortion leaders in the states. It's no wonder they haven't put out an annual report since 2021, since it would surely show this dramatic increase in both abortion numbers and government funding."

Obviously, an organization sitting on a billion dollars in assets doesn't need taxpayers' help to begin with. But it's an even more outrageous partnership when you consider that the government's money makes it easier for Planned Parenthood to do two very controversial things: promote the destruction of innocent life and elect one party's candidates. Subscribe for free to Breaking Christian News here

Suzanne Bowdey serves as editorial director and senior writer at The Washington Stand.