[CBN News] In some respects, the plight of Native Americans hasn't changed. They face troubling circumstances with issues ranging from substance abuse to a massive COVID-19 impact, to an alarming number of missing and murdered women. (Screengrab image)

Yet, in the midst of the suffering, Stands-Over-Bull and her husband Russell say God is on the move.

"We can feel and sense the rumblings of revival, and when I say revival I mean people's hearts turning back to God," she shared.

"We've been having healing revivals over the online church. God's been healing people through social media. People are giving their hearts to the Lord," explained Russell Stands-Over-Bull.

The senior pastors of Arrow Creek TV e-church said God called them to start the online fellowship in 2018. 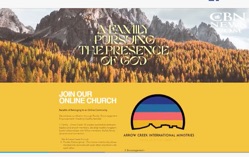 "We couldn't even comprehend what that would look like, but God put it on our hearts, and we began to establish Arrow Creek TV," Russell told CBN News. "And Millennials started coming to the church, and I'm so proud of my congregation. We've got the best. We've got five continents represented." (Screengrab image)

"We probably represent the biggest church in the Indian community throughout the US," he continued.

Russell said the Pentecostal roots of revival run deep in his family and the Crow Nation. His mother, Sharon Stands-Over-Bull, is also a pastor and Crow elder. She recalled how in 1906, her grandmother attended the Azusa Street Revival in California.

"Whole communities were touched by the fire of the Holy Spirit, and the Crows eventually became known throughout Indian Country as the center for Pentecost," explained Russell. "This was the capital for Pentecost, and still is considered that by many neighboring tribes."

Leaders of the Crow Tribe have even put up a sign which boldly proclaims that "Jesus Christ is Lord on the Crow Nation". It also has a Scripture that reads, "Blessed is the nation whose God is the Lord; and the people whom he hath chosen for his own inheritance." -Psalm 33:12 KJV

In addition, the southeast Montana tribe passed a 2013 legislative resolution "to honor God for his great blessings upon the Crow Tribe and toÂ proclaim Jesus Christ as LordÂ of the Crow Indian Reservation." They also fly the flag of Israel next to the sign.

"The Scripture says that as we stand with Israel, we are a blessed nation, so we held that," Sharon Stands-Over-Bull said. "And so today, there are ministries throughout the reservation, and people have been saved and healed and shouting the victory."

"So I'm just so glad that in my lifetime, I got to be a part of it, and it's still ongoing," she added.

"I had a little granddaughter born. One day my house got busted. It was surrounded by cops, and I stood by, and I watched," she said. "I didn't care about anything except for the drugs in my hands."

"And just once, I turned around and looked and remembered that little baby was in there, and that was the beginning of me thinking of my future, my family, my community, and what I wanted to do," she continued.

"And basically, I just looked to the sky and asked God to help meâif He was real, please save me," Windy shared.

Cross Guns said she, too, and her family is experiencing a revival.

"Them and friends and fellow addicts in this community have seen my recovery, and they believe what I believe in now. I mean they saw it," she explained. "My whole family converted; they're now Pentecostal Christians, too."

Patrick Matt, Jr., is a member of theÂ Confederated Salish and Kootenai TribesÂ on the Flathead Reservation in western Montana. A preacher's kid, he calls himself a product of a 20th century Pentecostal Christian movement.

"If I can shine as a light to my people, to say God is doing something with me. God is changing me. God is doing mighty things in my life, in my family's life, He can do it for you!" he exclaimed. "Then, amen! Amen and amen."

Russell Stands-Over-Bull said the goal now is teaching his church to "sustain revival" through fasting and prayer.