"We're very hopeful and he's doing very well in the fight to get better, but the community and the prayers and the support that we've received is unbelievable. But he's fighting the fight right now and it's just a shock today to us and it's been really tough." -The 12-year-old athlete's uncle, Spencer Beck 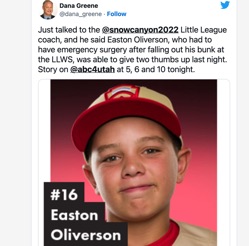 [Faithwire.com] A Little League World Series player from Utah is in a medically induced coma after falling off his bunk bed in Williamsport, Pennsylvania, where the competition is being held. (Screengrab image)

Easton Oliverson of the Snow Canyon team in Santa Clara sustained a skull fracture after falling from the bed Sunday night, when he was rushed into emergency surgery,Â according to KSTU-TV.

"We're all praying for him," he said... Subscribe for free to Breaking Christian News here