Faith-Based Schools Win a Big Victory, but Biden's Gender Agenda Still Being Deployed across the Country

"While it shouldn't have taken a federal lawsuit, at least now, all religious schools like Grant Park Christian Academy who rely on the USDA's funding to serve nutritious meals to kids in need and can continue this vital service in their communities." -ADF Legal Counsel Erica Steinmiller-Perdomo 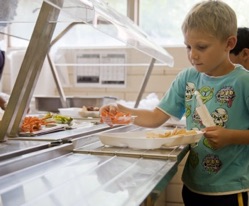 (Tampa, FL) — [CBN News] The Biden administration is attempting to force schools to accept its new definition of "sex" or lose federal funding, but in the midst of that battle one faith-based school has just won an important legal victory. (Image: Unsplash-CDC)

Schools that don't agree with this new LGBT policy could lose funding for kids' school lunches. That's why one Christian school in Tampa, Florida took the administration to court over the new definition, and it resulted in new guidance being issued from the USDA.

Under Title IX, participating schools agree not to discriminate based on sex. Grant Park Christian Academy, which serves low-income, minority families, fully complies with that requirement. But because of the school's religious beliefs, it could not comply with the new transgender aspect of the mandate.

On the school's behalf, Alliance Defending Freedom (ADF) filed a federal lawsuit against the Biden administration and the state's commissioner of agriculture and consumer services, Nikki Fried, who administers the National School Lunch Program in Florida.

Due to the ADF's lawsuit, the Biden administration and Fried approved the academy's application for funding to continue serving free meals to the school's students.

"While it shouldn't have taken a federal lawsuit," said ADF Legal Counsel Erica Steinmiller-Perdomo, "at least now, all religious schools like Grant Park Christian Academy who rely on the USDA's funding to serve nutritious meals to kids in need and can continue this vital service in their communities."

The Biden administration also granted the school's request for a religious exemption to the mandate. And on Friday, the administration said it would automatically respect exemptions for all religious schools if the schools' beliefs conflicted with the new Title IX mandate.

While this is a victory for Grant Park Christian Academy and all religious schools, the Biden administration's attacks on freedom are far from over, the ADF warned. Subscribe for free to Breaking Christian News here