BCN Editor's Note: It's ludicrous and irresponsible to think that a young child can comprehend all the repercussions and ramifications of undergoing transgender surgery. Pray that the eyes of people will be opened to the realities of this horribly destructive trend that has targeted our youth. -Aimee Herd, Breaking Christian News 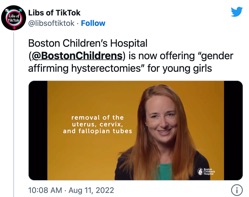 The since-removed video in question featured Dr. Frances Grimstad, who works for the hospital's division of gynecology. In it, she explained the kinds of hysterectomies girls could undergo.

"A gender-affirming hysterectomy is very similar to most hysterectomies that occur," the doctor said in the video clip unearthed by the popular Libs of TikTok account. "A hysterectomy itself is the removal of the uterus, the cervix—which is the opening of the uterus—and the fallopian tubes, which are attached to the sides of the uterus"... Subscribe for free to Breaking Christian News here