Insanity: Senate Dems Unanimously Vote Down Inflation Bill Amendment That Affirms Only Women Can Have Babies 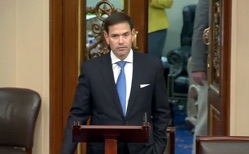 (Washington, DC) — [LifeSiteNews.com] Over the weekend, all Senate Democrats voted against an amendment from Senator Marco Rubio (R-FL) which affirmed that only women can have babies. (Screengrab image)

Rubio's amendment proposed to limit maternal and infant health funding to "biological females." It also would have returned the "Inflation Reduction Act" legislation to committee, a massive tax-and-spending bill that replaces the failed "Build Back Better" legislation.

"The only people who are capable of being pregnant are biological females," Senator Rubio said on the Senate floor.  "And therefore I think federal pregnancy programs should be limited to biological females." The term "biological females" is used to differentiate from the illogical "transgender female" which refers to a gender-confused man who pretends to be a woman... Subscribe for free to Breaking Christian News here

Continue reading, and watch Rubio's introduction to the amendment HERE.