Is Biden Trying to Goad the Right into a Violent Reaction to Mar-a-Largo Raid?

...Right-wing political violence would only benefit Biden and the Democrats politically ... This is not the time for a violent reaction to a questionably legal tactic of trying to intimidate Trump and his supporters. Get your revenge at the ballot box. 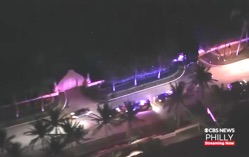 [PJMedia.com] There are many things fishy about the search of Donald Trump's Mar-a-Largo house on Monday. First, the former president had been cooperating since he left office with the National Archives and the Justice Department regarding documents taken there by Trump during his presidency. The Archives took 15 boxes of documents, mementos, and keepsakes from Trump's house last January. (Screengrab image)

A "person familiar" with the list of items removed from Mar-a-Largo  says "items that were improperly taken to Mar-a-Lago include a cocktail napkin, a phone list, charts, slide decks, letters, memos, maps, talking points, a birthday dinner menu, schedules and more."

There was also an inventory of classified documents about three pages long, according to the source. The classification ranged "from confidential to top-secret to special handling categories," claims this unidentified person.

Were 30 FBI agents really needed to conduct a search that Trump and his people claim was unnecessary because they were perfectly willing to cooperate?

The answer is yes—if your motive was to start a civil war... Subscribe for free to Breaking Christian News here