Little League Playoffs: 'The Greatest Moment in the History of Sportsmanship'

...The game resumed, somebody won, somebody lost, one team went to Williamsport, the other packed their bags for home, it will all be forgotten, but that moment of perfect sportsmanship will live for as long as there is human competition... 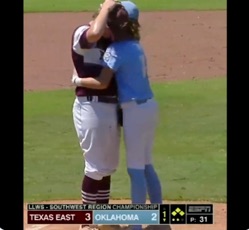 These days, I think we can all use a little inspiration and a story to lift our spirits. (Screengrab image)

Such is the case with a post that began making the Facebook rounds since Tuesday on Little League District 22's page.

Although our kids are grown, my husband and I tune in to the Little League playoffs and World Series held annually each summer. We love their good sportsmanship and heart as they battle to make it all the way to Williamsport.

The article posted on LL District 22's Facebook page did an excellent job of explaining about the heartfelt incident that took place just after an extremely frightening wild pitch. I encourage you to Click Here and read the entire post from the beginning. But below is an excerpt:

[Little League District 22 Facebook page] ...Kaiden Shelton is the big man on the powerful Pearland team, their big pitcher, their big hitter. Isiah Jarvis is the shortstop on the scrappy Oklahoma team that had through incredible perseverance made it to the championship game ... Then it happened, a twist of fate, Shelton lost control of a fastball and hit Jarvis right in the helmet, and Jarvis fell in a heap at home plate. Suddenly nobody was thinking about Williamsport anymore. With Isiah laying there and coaches and medical staff rushing to his prone body, Shelton kind of circled around the area between home and the pitcher's mound. The stadium was silent ...

According to the post, eventually Jarvis was helped to his feet, and as it seemed like the helmet took the brunt of the contact, he "trotted down to first." Play resumed, however, the magnitude of what had just happened hit Shelton the pitcher...

Before that pitch he had only one thought - Battle... win the battle ... the words of coaches...now the only words he could hear in his mind... were the words of the umpire: "Oh my God." And just like that he started to cry. He was standing on the mound crying, and nobody went to him, not his teammates, not his coaches. Then one person did go to him... Isiah Jarvis left first base threw his helmet off, walked right to him and hugged him. That hug said... it's okay. It was just what Shelton needed at that particular moment, I am sure his mom had wanted to rush out there and hug her boy, Isiah took care of that for her, because Shelton was a big kid with a big heart and he didn't want to hurt anybody, he didn't want to hear an umpire say "Oh my God" over something he did. He was there to play baseball and make new friends, he hadn't bargained for this.

The game resumed, somebody won, somebody lost, one team went to Williamsport, the other packed their bags for home, it will all be forgotten, but that moment of perfect sportsmanship will live for as long as there is human competition... Subscribe for free to Breaking Christian News here