"In an effort by the city and the YMCA to apply the neo-cultural gender rules at Mountain View Pool dressing, shower room facilities, women and children are being put at risk." -80-year-old Julie Jaman told her local city council. 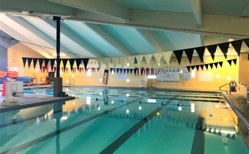 (Port Townsend, WA) — [LifeSiteNews.com] An 80-year-old grandmother in Washington state has been banned from swimming at the YMCA after she complained that "a man in a women's swimsuit" was "watching little girls" change. (Image: Screenshot via LifeSiteNews)

"In an effort by the city and the YMCA to apply the neo-cultural gender rules at Mountain View Pool dressing, shower room facilities, women and children are being put at risk," 80-year-old Julie Jaman told Port Townsend City Council on Monday.

Explaining why she feels this way, Jaman said that on July 26 she was showering in the local pool's facilities when she heard "a man's voice in the women's dressing area."

When she went to look at what was going on, Jaman said that she witnessed "a man in a women's swimsuit, watching little girls pull down their bathing suits in order to use the toilets in the dressing room."

While disputing Jaman's account, the YMCA's Marketing and Communications Manager did not deny the presence of the man, but told The Post Millennial that the staff member in question was not "engaging" with the young girls but was simply escorting them to the dressing room.

The Communications Manger also confirmed that Jaman was indeed banned from the facility, but stated that this issue is just one in a series of many that led to that decision.

In a local report from the Port Townsend Free Press, Jaman went into more detail about what she says happened during the July 26 incident.

"There were gaps in the curtain and there I was, naked, with soap and water on me, and this guy, right there very close to me," recalled Jaman.

"I asked, 'Do you have a p-n-s?' He said, 'That's none of your business.' That's when I told him, 'Get out of here, right now'"... Subscribe for free to Breaking Christian News here