"To sum up, the mother is a woman. The father is a man. And leave our kids alone. Full stop. End of discussion." -Viktor OrbÃ¡n 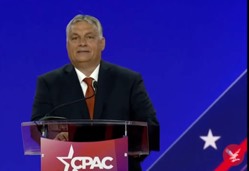 "Hungary shall protect the institution of marriage as the union of one man and one woman!" Orbán told the cheering crowd at CPAC Dallas on Thursday in a speech titled "How we fight."

"Family ties shall be based on marriage or the relationship between parents and children. To sum up, the mother is a woman. The father is a man. And leave our kids alone. Full stop. End of discussion," added the conservative leader, at which point the camera shows members of the crowd giving the Hungarian politician a standing ovation.

Orbán, who has won four consecutive elections in Hungary, also explained that when tackling the current issues in society, "Politics, my friend, is not enough. This war is a culture war. We have to revitalize our churches, our families, our universities and our community institutions."

Describing how he has achieved political success, Orbán said one of the main factors is his government's devotion "to law and order without compromise," humorously adding that his government "decided we don't need more genders, we need more rangers"... Subscribe for free to Breaking Christian News here