'Faithâ¦Makes Me Keep Going': A Look Back at Legendary Sports Broadcaster Vin Scully's Love For the Lord

"...I used my faith to guide me straight and narrow and strong, for sure." -Vin Scully 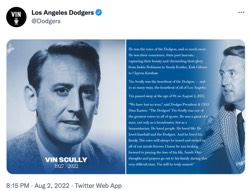 Scully, 94, died Tuesday night at his home in Los Angeles, California, sparking many reactions. The news was immediately met with lament, fond memories, and loving messages.

Among the details to re-emerge was the known fact Scully, who spent 67 years on the air, was often outspoken about his beliefs, openly praising the Lord and describing the impact faith had on his life.

Catholic media outlet Angelus once covered the famed broadcaster's Catholicism, noting in a 2016 piece how he had quipped about the famous quote, "If you want to make God smile, tell Him your plans."

Scully offered up the proclamation when asked about (how) life was going after his 2016 retirement.

"That quote has been so much a part of me, I don't know when it began," he said. "Maybe as a child, I heard a priest say it, and it just stuck. It makes good sense. You know, we try to write our own script and it's a mistake. There's a script already written for us."

That latter point about God's plans for each human truly stands out and sheds light on Scully's faith in the Almighty.

He told Angelus his beliefs always helped him keep "things in perspective," and he had "not wavered."

"Faith is the one thing that makes it work, makes me keep going. You appreciate what you've been given," he said at the time. "You know, this isn't the only stop on the train. There's one big one we're still waiting for. I used my faith to guide me straight and narrow and strong, for sure."

And Scully knows a thing or two about forging on through pain. His first wife, Joan, died in 1972, leaving him with three children. His son, Michael, was later killed in a helicopter accident at the age of 33 in 1994. He also lost his second wife, Sandi, in 2021 due to ALS (Lou Gehrig's disease)... Subscribe for free to Breaking Christian News here