...They've named the bill the Inflation Reduction Act—as if Americans won't notice that it accomplishes the exact opposite. 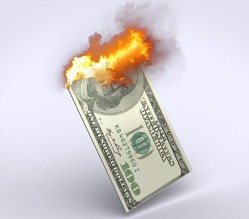 [AmericanThinker.com] What could be dumber than spending $433B that we don't have during an inflation crisis? Raising taxes by $739B during a recession, that's what. (Image: Pixabay)

Could anything be less economically sound than doing either of those two things? Yup! The Dems are about to give us a real demonstration of cluelessness ... And they're going to do it while Americans are screaming that the economy is our biggest concern right now. So are the Democrats

more focused on ideology than the actual needs of the country?

My money's on "more focused on ideology." They know by now that November is going to be a bloodbath, and they're doing as much as possible to "fundamentally transform" America into North Cuba with their limited time left.

This has all been enabled by Joe Manchin, who finally caved to the pressure of his fellow Democrats and agreed to support a Build Back Better light bill. I guess he didn't want an assassin en route to West Virginia, like what happened with Justice Kavanaugh. But you've got to give the Dems points for moxie. They've named the bill the Inflation Reduction Act—as if Americans won't notice that it accomplishes the exact opposite... Subscribe for free to Breaking Christian News here