Fox News sold out to the LGBT agenda long ago, so it's no surprise that the once-conservative news outlet is following the lead of the WHO and CDC by obscuring the fact that men who have anonymous sex with men are the epicenter from which the scourge of monkeypox is spreading. 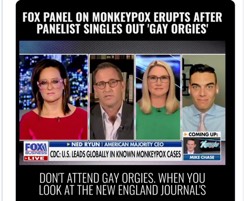 In a segment focusing on the spread of monkeypox, three panel members—including the Fox News host, Kennedy Montgomery—slammed American Majority CEO Ned Ryun as a "bigot" for daring to point out that more than nine out of 10 cases of monkeypox are contracted by men having sexual relations with men.

"It's not about gay," insisted Polumbo, a homosexual "libertarian/conservative" DC opinionator now serving as a policy correspondent at the Foundation for Economic Education.

Polumbo posted a clip of the panel discussion on Twitter.

"Come on, Ned," chided Kennedy, shaking her head in disapproval. "Come on, man."

"Go look at the New England Journal's report that NBC reported on Friday in which of the 528 cases they reviewed, 95% were between sex between men," said Ryun, picking up where he left off.

"I think we need to have a serious conversation about where this is coming from," said Ryun as Polumbo continued to try to talk over him, "instead of going crazy and declaring a national pandemic when 3,000 people have it right now. It's insane"... Subscribe for free to Breaking Christian News here