PRAY: Kentucky Floods Take Dozens of Lives, Hundreds Now Homeless; 'Wiped Out Areas Where People Didn't Have a Lot to Begin With'

One father who found his daughter after she floated to safety on a rooftop said, "We lost everything today, everything except what matters most."

[CBN News] Search and rescue operations are ongoing in eastern Kentucky where dozens are still missing from devastating floods. At least 28 are already known to have been killed, and the number of dead could rise significantly. (Screengrab image)

Parts of eastern Kentucky received between 8 and 10 1/2 inches in just 48 hours, creating flash flooding that swept away what little some people had—their homes.

Retired Coal Miner Hubert Thomas, who lost his house, said, "I had my whole life savings saved in it, and I ain't got nothing."

Eunice Howard, who lost her home said, "It took about five minutes for that to happen, about five to six minutes and it was gone from the time I got out of the house."

Kentucky Governor Andy Beshear said, "It wiped out areas where people didn't have a lot to begin with." 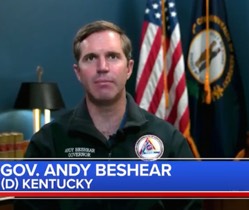 Among those lost are four children—aged 2 to 8—swept from their parent's arms as they clung to a tree. The parents survived. (Screengrab image)

Beshear told NBC's Meet The Press the final death toll will not be known for some time.

"We know it's going to grow. With the level of water, we're going to be finding bodies for weeks, many of them swept hundreds of yards, maybe a quarter mile plus from where they were lost," Beshear said.

Damage to roads and bridges and even more heavy rains on Sunday hampered rescue efforts.

The National Guard says it used helicopters to rescue more than 400.

Chief Benny Bailey of the Jones Fork Volunteer Fire Department said, "This was something that didn't concentrate itself—a tornado has a path that hits that swath and it's gone. This hit the entirety of the county."

Blistering heat and humidity is expected in the days to come. Shelters have opened for hundreds of homeless.

The White House has declared a federal disaster to free up direct relief money to more than a dozen Kentucky counties.

Operation Blessing has already delivered pallets of water and Home Depot disaster relief kits to several churches in the area and is continuing its relief operations as needs grow.

"These communities, number one, are already in poverty-stricken areas. They were already struggling. Not just our community but eight counties around us have been devastated by the flood," Adair said.

One father who found his daughter after she floated to safety on a rooftop said, "We lost everything today, everything except what matters most." Subscribe for free to Breaking Christian News here