'My Child Is a Girl': Chicago Mom Tearfully Tells Story of Losing Custody of Teen Daughter for Denying She's Trans

"They want me to have a certain understanding that there is such a thing as a child who is born transgender and this is who they are. I don't believe that. My child is a girl. I won't lie to her or anyone else. I think that's good parenting." 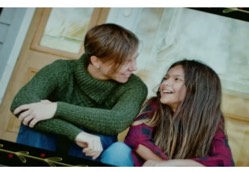 [Faithwire.com] A Chicago mother has lost custody of her daughter for refusing to affirm her child's transgender identity. (Screengrab image)

Since 2019, Jeannette Cooper's then-12-year-old daughter Sophia has identified as a transgender male—a decision she announced when she arrived at her father's house, unbeknownst to her mother.

Sophia's father soon thereafter alleged during a court hearing his young daughter was "no longer mentally or emotionally safe" while in her mother's custody. Prior to that, Cooper had custody of their daughter six days and seven nights a week, according to the Independent Women's Forum.

Due to the parents' disagreement, both Sophia's mother and father underwent a battery of psychological tests, home visits, and character evaluations. While the report itself is confidential, public legal filings show no evidence of abuse. Nevertheless, those evaluating Cooper determined she needed to work on her understanding of Sophia's gender dysphoria and her decision to change her sexual identity. (Screengrab image)

Cooper has, since then, been virtually removed from her daughter's life altogether.

"People who are imprisoned have more communication with their child than I do," Cooper lamented, grieving the fact she missed her daughter's 13th, 14th, and 15th birthdays and will soon miss her 16th.

She went on to explain, "The thing that I am clearly not complying with is this concept that ‘good parenting' means that you affirm a child's idea that there is something wrong with them. I'm not willing to do that." 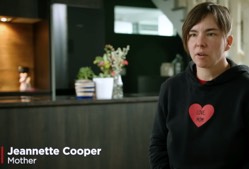 "They want me to have a certain understanding that there is such a thing as a child who is born transgender and this is who they are," Cooper continued. "I don't believe that. My child is a girl. I won't lie to her or anyone else. I think that's good parenting." (Screengrab image)

Cooper—who identifies as a "radical feminist" and has voted for Democrats since she was 18 years old—is rejecting the left's view that a child can be transgender and that affirming his or her identity is the only correct action for a parent to take.

"It is unfortunate that we are teaching children that a word will cause them to commit suicide," she said. "That is not how suicide works. We know that children who are depressed, anxious, autistic, have a history of childhood trauma are more likely to kill themselves, are more likely to..." Subscribe for free to Breaking Christian News here