When I asked Nancy what verse she prays often concerning the children, she cited one from Isaiah: "No weapon formed against you shall prosper, and you will refute every tongue that accuses you. This is the heritage of the servants of the LORD, and their vindication is from Me," declares the LORD. (Isaiah 54:17 BSB). 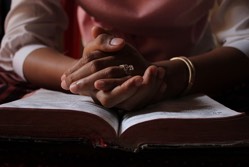 [IFAPray.org] Father, thank You for giving creativity to Your people. I pray that You would continue to pour out ideas that will inspire Your people to get involved. Give us wisdom and courage to step out in faith and to put hands and feet to our prayers. (Image: Pixabay)

The heart of Intercessors for America is for prayer. It is something we can all do. Prayer is universal. We can all pray, but the next step is to take action, and for many, that can be intimidating. And yet this is where our hands and feet become involved in our prayers.

Visit your state page to pray

Here is an encouraging story about a woman who has been a faithful intercessor on behalf of children:

Nancy Cammarota, a former crisis-pregnancy counselor and special-education teacher, was led by Holy Spirit to take action in a creative way. At 71 years young, she is still interceding for the children and about the war being waged against them.

Nancy resides in New Jersey, but she was on a prayer call from Texas. She shares how the leader of that group was discussing the need for legislation to remove inappropriate LGBTQ books from the libraries. Unfortunately, those who were trying were finding no success. This was a discouraging report, Nancy recalls. And later that day, she received yet another bad report, this one regarding her family, and she became angry at the devil. "Enough is enough—I've had it!" she remembers saying.

At that moment, she suddenly got an idea for removing these offensive books from the libraries in her neighborhood. "If the books aren't on the shelves," she thought to herself, "they cannot harm children anymore."

Nancy went into action. She applied for a library card in her county of Somerset. This instantly gave her access to 11 library branches. Nancy went to the children's and teen's sections and checked out every LGBTQ book she could find. Then, she found out something that really excited her: Not only could she check the books out, she could reserve them as well—checking them out again and again, for up to 10 times in a row, as long as no one else was requesting the books in the meantime. With the normal term per book being three weeks, if she could reserve a book for up to ten times, at three weeks each time, this came to a total of 30 weeks. And that amounted to nearly an entire school year in which a sexually inappropriate book would remain out of circulation and out of the hands of any minor.

How awesome is that?

Nancy's hope is that many more intercessors will get involved in the same way. "Anyone can do this," she said. "It's so simple, it's practical, it's legal—and it's protecting the children."

When I asked Nancy what verse she prays often concerning the children, she cited one from Isaiah: "No weapon formed against you shall prosper, and you will refute every tongue that accuses you. This is the heritage of the servants of the LORD, and their vindication is from Me," declares the LORD. (Isaiah 54:17 BSB).

What a wonderful testimony of how we can all become more involved. None of us can do everything, but we can all do something. I pray that this story will impart courage to every reader.

Intercessors, if you'd like to follow in Nancy's footsteps, you can head to your local library and reserve as many LGBTQ books as possible. If you don't know what to look for, click here for a link that contains lists of LGBTQ books intended for children. Subscribe for free to Breaking Christian News here

Author Gloria Robles is a passionate intercessor with a prophetic voice for today. For more from Gloria, go to Spotify or Anchor to listen to her podcast Something To Share.