Drag Queen Story Hour events have become a symbolic lightning rod for the ongoing efforts of the LGBT movement to inculcate children with their 'values'... 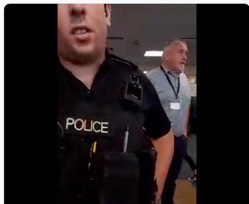 (United Kingdom) — [LifeSiteNews.com] Drag Queen Story Hour is again at the center of a maelstrom of controversy—this time in the United Kingdom. (Screengrab image)

"Aida H. Dee," the name used by Sab Samuel, recently began a cross-country Drag Queen Story Hour tour. Samuel, according to an interview with the BBC several months ago, "seeks to explain non-heterosexual emotions to young people" and seeks access to both primary and secondary schools. "So many children out there don't get an LGBTQ+ model because it's taboo ... Role models are like oxygen, if you don't have them you can't breathe and for LGBTQ+ people, we've been dying."

Some people, it turns out, aren't keen on a drag queen offering himself to children as a role model. During Samuel's Monday event in Reading, two protestors crashed the event at 9:30 AM while another 25 protestors gathered in Abbey Square just outside the library. There was a heavy police presence, but nobody was arrested. A spokesperson by for the Reading Council condemned the protestors, stating:

It is extremely disappointing that a small group attempted to disrupt story time. This was a ticketed event and all parents attending were aware of the nature of the performance. It is regretful that some people chose not to respect parental choice. The council does not tolerate threats or abuse against our staff, members of the public or the entertainers we have invited to perform at our venues. We worked closely with the local police and our own security teams to ensure the safety of everyone attending the event. Reading is a diverse community and our library service seeks to reflect and celebrate that by hosting and supporting a wide range of artists and audience experiences.