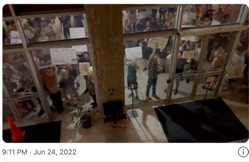 Thousands of demonstrators descended upon the building in Phoenix late Friday night as lawmakers were working on passing a series of bills, according to a statement released by Sen. Rogers.

"Last night, anti-life radicals converged on the Arizona Senate and attempted to disrupt our work with terror and violence. They repeatedly attempted to breach the perimeter and enter the building but law enforcement bravely stood their ground and saved the day," the statement reads.

The Arizona Department of Public Safety said the riot "brought an estimated 7,000 to 8,000 people" to the Senate building. "What began as a peaceful protest evolved into anarchical and criminal actions by masses of splinter groups," AZDPS stated.

Videos posted on social media show the hysterical crowd trying to enter the building by breaking windows and pushing down doors. Many protesters were chanting, "my body, my choice."

Arizona State Sen. Kelly Townsend (R) tweeted that the threat had even turned into a hostage situation.

"We are currently there being held hostage inside the Senate building due to members of the public trying to breach our security. We smell teargas and the children of one of the members are in the office sobbing with fear," the senator wrote.

Legislators were moved to the basement of the Senate building for their protection while police worked to control the riot.

"I cannot thank @Arizona_DPS enough. You were patient, yet acted when needed. God bless you guys!"

After police deployed the tear gas, the crowd began to disperse, however, some protesters remained outside the building.

"We are incredibly thankful for our local law enforcement who quickly intervened during what could have been a destructive and dangerous situation for our members, staff and public inside the Senate," said Senate President Karen Fann.

Rioters spraypainted "Abort the Court" on several monuments and memorials around the Senate building.

Acts of rage and violence began early last month after a leaked Supreme Court draft opinion indicated that the court was preparing to ban abortions nationwide.

As a result, angry protesters have threatened Supreme Court justices and vandalized dozens of pregnancies centers, churches, and other pro-life institutions. One abortion extremist even traveled to the home of Justice Brett Kavanaugh to murder him, but then the gunman's sister convinced him to turn himself in.

The ruling is expected to lead to abortion bans in roughly half the states. Subscribe for free to Breaking Christian News here