'Honor Them For Their Great Sacrifice': Chris Pratt Praises Men and Women in Uniform after WWII Veterans Surprise Him at Hollywood Premiere

"Well, this is a wonderful group of extraordinary men of the greatest generation ... I'd like to sit down and really talk to them..." -Chris Pratt 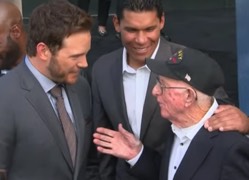 [Faithwire.com] Actor Chris Pratt was "thrilled" to meet World War II veterans Wednesday night at the Los Angeles premiere of his new Amazon series "The Terminal List," telling the Associated Press he wanted to "honor them for their great sacrifice." (Screengrab image)

"Well, this is a wonderful group of extraordinary men of the greatest generation," Pratt said. "These are World War II veterans, and every year they take a pilgrimage back to Normandy."

Pratt said he was surprised to see the men and that he wanted to take the time to salute them properly.

"It was an opportunity to just ... catch up with them. I've been following their story," he said. "And when I saw them, I was like, 'Oh, my gosh. We've got to spend time together' ... I'd like to sit down and really talk to them and honor them for their great sacrifice"... Subscribe for free to Breaking Christian News here