âIt should go without saying that a State may take action to prevent election fraud without waiting for it to occur and be detected within its own borders." -Excerpt from majority opinion 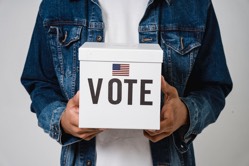 [CNSNews.com] On Thursday, the Supreme Court ruled in favor of Republican lawmakers in North Carolina seeking to defend the state's voter integrity laws against legal challenges, such as those by the NAACP and its affiliates. (Image: Pexels)

The decision overturned a lower court's ruling that the Republicans could not help defend North Carolina's law requiring in-person and absentee voters to present any one of 10 forms of photo identification.

"The 8-1 decision did not deal directly with the lawfulness of the voter law, but rather which government bodies can defend the law in court," The Hill reports.

"The 8-1 decision doesn't end the more than three-year dispute over the voter ID law, which is not currently in effect and has been challenged in both state and federal court," WSOC TV explains:

"The law requires voters to show a photo ID to vote—whether it's a driver's license, a passport or certain student and local government identifications.

In the majority opinion, Justice Neil Gorsuch explained the basis for the court's 8-1 decision:

"Through the General Assembly, the people of North Carolina have authorized the leaders of their legislature to defend duly enacted state statutes against constitutional challenge. Ordinarily, a federal court must respect that kind of sovereign choice, not assemble presumptions against it."

"State Senate leader Philip Berger and Timothy Moore, the speaker of the North Carolina House, both Republicans, sought to intervene because the law is being defended in federal court by a Democratic attorney general. The decision may help guide similar conflicts in states where the legislative and executive branches are controlled by different parties."

"In March, an 8-1 majority of the Supreme Court allowed Kentucky's Republican attorney general to step in to defend a state ban on a common abortion procedure. But in that case, Kentucky's Democratic governor declined to defend the law. In the North Carolina dispute, Democratic officials have continued to defend the new election requirements."

And, last July, the Supreme Court ruled in favor of Arizona's election integrity laws requiring in-precinct voting and voter identification, which had been overturned due to claims of racial discrimination.

According to the majority opinion:

"It should go without saying that a State may take action to prevent election fraud without waiting for it to occur and be detected within its own borders.

"Neither Arizona's out-of-precinct rule nor its ballot-collection law violates Section 2 of the VRA. Arizona's out-of-precinct rule enforces the requirement that voters who choose to vote in person on election day must do so in their assigned precincts. Having to identify one's own polling place and then travel there to vote does not exceed the ‘usual burdens of voting.'"  Subscribe for free to Breaking Christian News here