The Biden administration came to power with an open-borders mentality, determined to undo everything President Donald Trump had done to control the border. Biden ended the successful Migrant Protection Protocols, which, by sending would-be illegal immigrants back into Mexico while their cases were decided, deterred fraudulent and frivolous asylum claims by economic migrants. 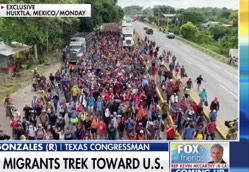 [DailySignal.com] Consumers of the mainstream media might think that all news stopped on Jan. 6, 2021, but readers ofÂ The Daily SignalÂ know that illegal crossings at the US border are at "astronomical and record-breaking levels," as a just issued report from the Republican minority on the Senate Foreign Relations Committee puts it. (Screengrab image)

The 47-page report, "Biden's Border Crisis: Examining Policies That Encourage Illegal Immigration," describes the ongoing disgrace on our southern border and the utter failure of the Obama and Biden administrations to address it, concluding with some recommendations for immediate action to secure our country from uncontrolled illegal immigration.

First, the numbers: The report says that 234,088 foreigners were encountered by US Customs and Border Protection at the border attempting to illegally enter the country in April. That's the highest-ever monthly total.

That staggering record was already broken, even as the report was being written. In May, "there were 239,416 encounters along the southwest land border," according to government figures.

That doesn't count the unknown (and unknowable) number that evaded detection entirely.Â One estimateÂ puts that numberâthe "got-aways"âat about a third (32%) of those caught, which would mean more than 600,000 last year.

According to the report, most illegal crossers still come from Mexico and the Northern Triangle countries of Central America (El Salvador, Guatemala, and Honduras), but the number from elsewhere increased nearly nine times between ... Joe Biden's inauguration in January 2021 and March of this year to more than 88,000.

It seems not just Ecuadorians, Haitians, and Cubans, but also Cameroonians, Bangladeshis, and Chinese have received the message from the Biden administration that the border is wide open to illegal crossing without credible repercussions.

As 2022 rolls on, we are well on target to exceed the 1.7 million illegals apprehended on the southern border in 2021, which was itself an unprecedented number.

As the report makes clear, this crisis has been brewing for decades. The "push factors" in Latin America (not to mention much of Africa and Asia) get worse: feckless governments, corruption, poverty, and economies hampered by socialism or incompetence, or incapable of harnessing the labor of their burgeoning populations.

Transnational criminal organizations such as the Tijuana cartel and gangs such as MS-13 have established themselves as essential brokers on the route into the US and are making billions.

The report says that "55% of those traveling illegally [use] a smuggler" at rates up to $10,000 a head. Illegal crossers from the Northern Triangle alone paid out an estimated $1.7 billion in 2021 to get through Mexico into the US

Meanwhile, what has the US done about it?

To summarize the report's conclusion, we have spent billions of dollars in foreign assistance in failed efforts to tackle the "root causes" of immigration. No doubt some of it reached the target countries, but much will have gone in administration and overhead fees to the "Beltway bandits" run by nongovernmental organizations with government connections.

The Obama administration's Strategy for Engagement in Central America was built on the fantasy that any amount of US money (in that case, $3.6 billion) could fix what ails the countries to our south.

The idea that we can spend enough on noble but vague goals such as security cooperation, promoting economic prosperity, encouraging good government, and fighting corruption in El Salvador, Honduras, or Guatemala in time to deter their youth from leaving right now is ludicrous.

In the words of the State Department's senior Latin American official in 2019, "This approach failed." There is no realistic correlation between US aid dollars spent in Mexico and the Northern Triangle, and any reduction in illegal crossings of our border by the targeted nations, much less from places such as Eritrea and India, which the "root causes" aid spigot does not even touch.

Meanwhile, as the report makes clear, President Barack Obama's Deferred Action for Childhood Arrivals and Deferred Action for Parents of Americans and Lawful Permanent Residents programs were essentially amnesty by the slow boat, adding to the factors pulling illegal migrants into the US

Just as "Justice delayed is justice denied," so too action on immigration deferred, whether by Temporary Protected Status, humanitarian parole, or deliberate lack of prosecution, is amnesty in practice.

With an official policy of "prosecutorial discretion" not to deport them, work authorization, schooling for their children, health care in emergency rooms, and even driver's licenses and "free" in-state college tuition in many states, illegal residents of the U.S are highly incentivized to stay.

The Biden administration came to power with anÂ open-borders mentality, determined to undo everything President Donald Trump had done to control the border. Biden ended the successful Migrant Protection Protocols, which, by sending would-be illegal immigrants back into Mexico while their cases were decided, deterred fraudulent and frivolous asylum claims by economic migrants.

Biden also ended the promising Asylum Cooperative Agreements with Northern Triangle countries, and through regulatory overreach and prosecutorial discretionâwhich in practice means telling prosecutors not to do their jobsâundid efforts to streamline the asylum-processing system.

US immigration courts already have 1.7 million pending cases, and that impossible backlog is rapidly increasing.

The Biden regime is also determined toÂ end Title 42, the health-related provision enacted by Trump because of COVID-19 that allows CBP to expel illegal immigrants before they can be admitted and claim asylum.

The disdain with which this administration treats career border officials and agents who attempt to enforce the law is disgraceful, from Biden's silence when TexasÂ National Guardsman Bishop EvansÂ died saving illegal immigrants from drowning to the White House's refusal to apologize to mounted Border Patrol agents afterÂ falsely accusing themÂ of using their reins to whip Haitians crossing into the US illegally.

The consequences of Biden's abject refusal to enforce our immigration laws are obvious, if slow to unfurl. At current rates, the Biden border is allowing in enough illegals to fill a city the size of Houston or Chicago in a year. Among them, CBP will likely arrest more than 10,000Â criminal aliensÂ in 2022.

How many made it through, while agents were pulled off the border to rubber-stamp "credible fear" claims that end in asylum applicants being released indefinitely?Â The Department of Homeland Security reported in 2017Â that of the 89% of illegal migrants from the Northern Triangle who claimed asylum and then passed an initial "credible fear" screening, "more than half never applied for asylum after being released or failed to show for their initial hearing."

Seizures of drugs at the border are at record levels, but enough gets through that more than 107,000 Americans died of overdoses last year.

Despite the failure of Obama's effort to stem the tide of illegal migrants by throwing money at "root causes," according to the report, the Biden administration doubled down with its own Strategy for Addressing the Root Causes of Migration in Central America.

It's the same idea: billions in deficit-funded US tax money in an attempt to create functional democracies in the Northern Triangle. This being the Biden administration, it sprinkled the plan with terms such as "community-based solutions" and "safe spaces," and added climate change and "sexual, gender-based, and domestic violence" to the list of problems to solve, but it's essentially the same program as Obama's and will achieve as little.

What we can't do is clear. "The United States is not responsible for solving the transnational crime, migration management, and border security issues in Mexico and northern Central America," the report concludes.

What the administration can do, the senators recommend, is "use all available tools to secure the border" right now, including Title 42 and the Migrant Protection Protocols.

In the longer term, they recommend targeting US assistance to "strengthen the capacity, funding, and staffing of migration management and law enforcement agencies" in Mexico and the Northern Triangle countries to process refugees there, and signing Asylum Cooperative Agreements or similar undertakings with them to stem the flow into the US. (Screengrab image)

The senators also recommend working with our southern neighbors to prosecute the organized criminals who are making money through the misery of both migrants and the tens of thousands of Americans who overdose annually on drugs smuggled in through Mexico.

There's even more to be done, as outlined in a May 2022Â joint letter to CongressÂ from independent public policy groups, including The Heritage Foundation, former Trump administration officials, and others.

Those measures would reestablish theÂ successful "Remain in Mexico" agreement, correct regulatory overreach, limit prosecutorial discretion, and generally get control of the border through proper enforcement of existing laws.

Only once the border is no longer an unmitigated chaos can the country begin to think about reforming immigration laws in the greater national interest.

Until then, warming over the cold hash of foreign aid and social justice programs that have been tried and failed before is only going to make Americans poorer,Â less safe, and less confident in their government's ability to protect them.

Simon Hankinson, a former foreign service officer with the State Department, is a senior research fellow in The Heritage Foundation's Border Security and Immigration Center. Subscribe for free to Breaking Christian News here