The Sound of Revival and Redemption Coming 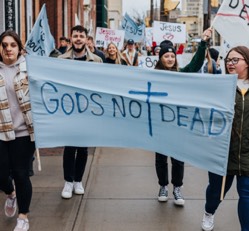 "...When multiple prophets begin hearing similar messages we must pay heed. Numbers of them are hearing that a great shaking has begun on the earth; but they have also been hearing that this will be accompanied by a great, worldwide revival. Do not be alarmed by the shakingâit is spoken of in Scripture and must occur ... The agendas of evil governments, systems and institutions must be dealt with; this is occurring. In our nation, not only is the ineptitude of anti-American, anti-God forces being exposed, but it is being done in a way that also reveals their hypocrisy and lunacy. Continue to pray for this exposure to occur, as well as the great spiritual awakening. It's coming." -Dutch Sheets

[IFAPray.org] Father, we pray for revival, redemption, and renewal to burn across our nation like fire. Stir in the hearts of every man, woman, and child, Lord, and bring them all to You. (Image: Unsplash-Daniel Gutko)

Multiple prophets have spoken of a coming revival. We must be attentive, listening for the Lord's voice and constantly praying.

Excerpt FromÂ Give Him 15-Dutch Sheets:Â Holy Spirit is aligning the nations and the spiritual realm, preparing them for His coming outpouring. Last week I read a post from Dr. Scott Reese which spoke of this. Scott used an allegory in which the earth had a spine encircling it. The spine had misalignment and diseased places, causing pain and suffering. In his vision, God was healing and realigning the spine, much like a chiropractor would do for a person.

I also read a post from my brother, Tim Sheets, in which he said a fresh Pentecostal outpouring of Holy Spirit has begun, assisted by a multitude of angels. He also spoke of the rumbling sound this was releasing in the spiritual realm...

Just before receiving Tim's word, another prophet and friend of ours, Gina Gholston, sent me a dream and word which was also about 'hearing' this sound of revival. Though Gina received the dream in January, she spoke about it on June 5, Pentecost Sunday. An amazing confirmation was received during the message. I believe that Scott's, Tim's and Gina's words are all related. Here is her account of the dream and what occurred as she shared it:

"On January 11, 2022, I had a dream in which I was sitting next to a campfire with a minister known for his masterful teaching on the subject of sound. He is also a renowned revival historian. As we sat together next to the fire, he held a long stick and was using it to stir the embers around the edge of the fire. While doing so he said, 'In days ahead there is coming a redemptive sound that that will provoke a redemptive movement...'

"He then gave a demonstration. Standing, he picked up a fairly large rock, lifted it high above his head, and dropped it right into the middle of the fire. As you can imagine, embers and sparks flew everywhere. He then stated emphatically, 'That is what this redemptive movement will be like once the sound is released. It will come hard and fast, and it WILL cause a response. There will be an instant breaking loose â a redemption. The Lord is going to redeem theÂ Church, and He is going to redeem the nation!...'

"According to Webster's Dictionary, the word redeem means 'to get or win back; to renew;' renew means 'to bring back to or put back into a former or original state.' I believe we are now in a time when Jesus is reclaiming His Church..."

When multiple prophets begin hearing similar messages we must pay heed. Numbers of them are hearing that a great shaking has begun on the earth; but they have also been hearing that this will be accompanied by a great, worldwide revival...

Father, though it seems to some that America and the Church have fallen so low there is no hope of redemption, we know You still reign. Your eternal plan of the ages has not changed. You've not altered the purposes and intentions You breathed and prophesied into theÂ ChurchÂ or our nation. You are now calling both back into alignment with Your original plans.

Though darkness has covered the earth and gross darkness has shrouded many people, You have released a redemptive sound that is stirring and awakening theÂ BodyÂ of Christ. Out of the ashes we are rising to shine with the unavoidable light of Your transforming glory. You have clothed us with Your righteousness and filled us with Your Spirit. We are now emerging with the wisdom to utilize the weapons of our warfare. ... We will stand under the weight of Your glory, and those who sit in darkness will see it and be drawn to Your great light. They'll be changed by the redeeming power of salvation through Your Son, Jesus! And in His name and authority, we pray, amen.

The Lord is reigniting HisÂ ChurchÂ with the fire of His glory, and we will shine with undeniable signs, wonders, and miracles as He stretches forth His hand through us to make Himself known. The redemptive movement has started, andÂ HellÂ cannot stop it!... Subscribe for free to Breaking Christian News here