Judge Rules Freedom Convoy Leader Did Not Violate Bail, Can Travel to Toronto for Award Ceremony 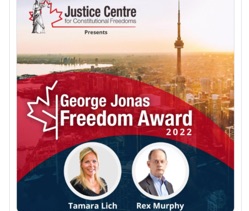 (Ottawa) — [LifeSiteNews.com] Freedom Convoy leader Tamara Lich will not return to jail and can travel to Toronto in June to accept a freedom award, after an Ontario judge ruled against a Crown argument claiming she violated her bail conditions. (Screengrab image)

In Ottawa's Superior Court May 25, Justice Kevin Phillips noted that Lich's initial bail release "remains appropriate" as she was following all of her bail conditions and that she already had "a taste of jail."

Phillips ruled that a Crown argument, declaring Lich had breached her bail conditions due to consenting to accept a freedom award from the Justice Centre for Constitutional Freedoms (JCCF), was not valid.

"No court will ever seek to control the manifestation of political views. The courts are not the thought police and are only meant to control conduct," said Phillips.

While Phillips agreed to allow Lich to enter Ontario for the award ceremony, she is not allowed to enter Ottawa's downtown core.

Phillips also rejected a plea from Lich's lawyer Lawrence Greenspon to allow her back on social media. The judge ruled that Lich is old enough to not need social media as a communications medium and could make do with texting.

Today, JCCF lawyer Eva Chipiuk said in a news release that for someone with no previous criminal charges, "it is our view that these revised bail conditions still excessively restrict Ms. Lich's fundamental Charter rights of speech, assembly, association, and political advocacy."

"The extent to which the Crown has pursued Ms. Lich is troubling. Homicide detectives, crown attorneys, and scarce court time are being expended on persecuting Ms. Lich and her peaceful activism against two years of repressive government lockdowns and mandatory vaccination policies," added Chipiuk... Subscribe for free to Breaking Christian News here