Years after Suicide Attempt, Here's the Urgent Message This Missionary Has for Fellow Black Americans

"Do not be the generation that drops this Gospel because you did not feel understood..." -Meka Ryanae 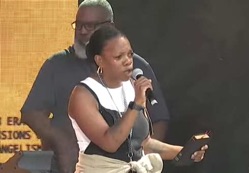 [CharismaNews.com] Before swallowing a bottle of pills, Meka Ryanae wrote 12 letters to family members detailing her hatred for each one of them. A Black college student suffering from a mental breakdown, Ryanae curled into the fetal position on the floor, crying, when the overdose didn't kill her. (Image: via Charisma News /YouTube)

"I can't articulate what happened, but it felt like a wind came into my room. I know it was the Holy Spirit," Ryanae, now a missionary to Mozambique with Rolland and Heidi Baker's Iris Global, recalls in a May 14 appearance at The Send in Kansas City, Missouri.

After the Holy Spirit touched her, Ryanae says, she went to church and watched others worshipping. "I told God, 'If You reveal Yourself to me, then I'll sell my life to You.'"

She ran to the altar, despite demonic voices threatening to kill her.

Crying for hours after everybody left the church, Ryanae felt love for the first time. "I walked away loving my parents—a father who threatened to kill me and a mother who told me, 'I never wanted you,'" she says.

She then determined to love her parents all the way to the cross.

After seven years of his daughter's unconditional love, Ryanae's father turned to Jesus from the Nation of Islam and repented of his physical abuse. Her mother, homeless in California three years ago, experienced Jesus' transforming love on the streets and moved into an apartment.

Both Ryanae and Heidi Baker appealed to tens of thousands of teens and Gen Zers at The Send, a massive missions and prayer movement held at Arrowhead Stadium in Kansas City on May 14.

Ryanae gives an impassioned plea to her fellow Black Americans to return to church. "This Gospel is living in us," she says, raising a Bible before the crowd. (Watch her speaking at this link at the 5:10:14 mark)

"My heart is burdened because, if you did not know, in the last two years a significant amount of Black people have left the Church," she says.

When she looks at and listens to Blacks, Ryanae is burdened by comments that the Gospel is for whites and is used to oppress.

"This Gospel is alive and has the power to transform our community, so don't give up on the Church," she says.

"Do not be the generation that drops this Gospel because you did not feel understood," she adds. "Do not waste the tears that our ancestors sowed so that we could have this freely. Don't drop it. Pick up your race again. Pick up your cross. Return to the altar."

Steve Rees is a former general assignment reporter who, with one other journalist, first wrote about the national men's movement Promise Keepers from his home in Colorado. Rees and Promise Keepers founder Bill McCartney attended the Boulder Vineyard. Today Rees writes in his free time. Subscribe for free to Breaking Christian News here