Authorities Missed Clues on Buffalo Killer; Strong Believers among the Dead; She Was 'the Apple of God's Eye'

Church deacon Heyward Patterson was also killed. His pastor says that, through Christ, Patterson had turned his life around. He was at the store giving rides to poor people. 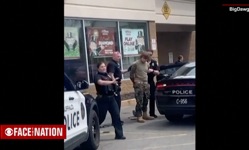 [CBN News] On a mission to kill black people: That's what drove a shooter to open fire in a grocery store Saturday in Buffalo, New York. Ten people, all African-American, died at the hands of the 18-year-old gunman. (Screengrab image)

The attacker surrendered to police, and the FBI is investigating the mass killing as a hate crime. The big question now: if authorities missed clues that could have prevented the shooting.

Eighteen-year-old Payton Gendron had been admitted to a hospital for a psychiatric evaluation last year after he had made threats at his high school. Then he seemed to drop off investigators' radar.

Gendron drove 200 miles from his home in southern New York state to "Tops Friendly" supermarket in Buffalo on a mission to kill black people. He had researched the location and even arrived in the area a day in advance to conduct reconnaissance.

Buffalo Mayor Byron Brown said, "This individual came here with the expressed purpose of taking as many black lives as he possibly could."

Gendron fired as many as 50 shots, killing 10 people and injuring 3 more. All of those who died were black. The gunman surrendered to police and is in custody.

Gendron reportedly posted a 180-page manifesto online that detailed the plot, and outlined a racist ideology rooted in a belief that the United States should belong only to white people. All others, the document said, were "replacers" who should be eliminated by force or terror.

The city of Buffalo is now trying to heal, providing support to the grieving. (Screengrab image)

Many of the victims are described as Believers who loved God. Among the dead, 72-year-old Katherine Massey was described as a beautiful person who would do anything for anyone.

Church deacon Heyward Patterson was also killed. His pastor says that, through Christ, Patterson had turned his life around. He was at the store giving rides to poor people.

And 77-year-old Pearl Young, who ran a food pantry, was also among the victims. A friend described her as a godly woman who was "the apple of God's eye."