"It is highly likely that, had this group of parents not revealed their findings, the show would have gone on and continued for years to come. That should concern everyone." -One of the parents 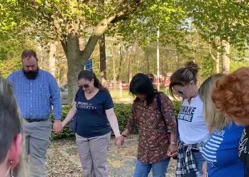 [Faithwire.com] A group of Pennsylvania parents descended on a school board meeting in the aftermath of a drag queen show hosted by a public school teacher who did not inform parents of the event. (Screengrab image: via Faithwire /Twitter)

In early May, video footage surfaced online of a drag queen show featuring sexually provocative dances at Hempfield High School. The after-school event was hosted by the Gay-Straight Alliance club and quickly elicited reactions from blindsided and outraged parents, according to The Daily Wire.

Before stepping into the contentious school board meeting, many parents gathered around the flagpole in front of the school district's administrative building, where they prayed for wisdom and protection ahead of the assembly... Subscribe for free to Breaking Christian News here