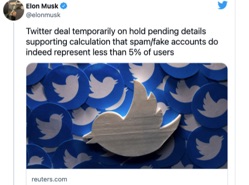 [ToddStarnes.com] Elon Musk announced Friday that his $44 billion deal for Twitter is "temporarily on hold" until he gets one request met. (Screengrab image)

The Tesla and SpaceX CEO has been criticizing the Biden administration, liberal media, and Twitter itself on the Big Tech platform for weeks.

With over 92.7 million followers, Musk suggested former President Trump should be restored to Twitter.

"Even though I think a less divisive candidate would be better in 2024, I still think Trump should be restored to Twitter," Musk tweeted Thursday night.

He also said, "Biden's mistake is that he thinks he was elected to transform the country, but actually everyone just wanted less drama."

After his announcement of the temporary pause on the deal, Twitter shares dropped 17.7 percent to $37.10 in premarket trading, Reuters reports.

If the deal does fall apart, Musk has agreed to pay a $1 billion termination fee, the outlet reports. Subscribe for free to Breaking Christian News here