"I ask for that knowledge, wisdom, and discernment on a daily basis and then just trust the prompting of the Holy Spirit..." -Paul Roushia 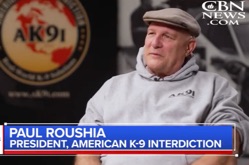 (Carrsville, VA) — [CBN News] Although COVID-19 cases are down across the country, the need remains for accurate testing, especially in the event of a major resurgence. (Screengrab image)

Leaders of a Virginia company say they have what it takes to test large numbers of people in a short amount of time. They're getting help from man's best friend.

At American K-9 Interdiction in Carrsville, Virginia, trainer James Overton plays with Blade, a German Shepherd-Belgian Malinois mix. The three-year-old is one of dozens of dogs the company uses for what it calls, "real-world K-9 solutions." Paul Roushia has led efforts at the company for 18 years.

"Primarily, what we do, we take dogs, and we condition them to find explosives, narcotics, bed bugs, and COVID. If it has an odor, we can train the dog to find it," Roushia told CBN News.

"These dogs—they never cease to amaze us; I don't think we deserve these dogs. I think their capabilities—I think we're just starting to scratch the surface of the things that these dogs are able to do for us," said trainer James Overton.

Roushia says the idea to train dogs to detect COVID came after hearing a competitor discuss the concept.

"So I mulled it over and prayed over it, and led by the Spirit and the team that you're going to meet here in a little while—we got our heads together and said, 'Here's the methodology we should probably use.' So we went with the cheek swab. We didn't use urine; we didn't use sweat. We didn't use the protein molecules; we went with an actual sample from the mouth, pretty much like the snap test, if you will," Roushia explained. 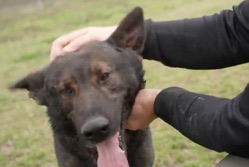 "So we partnered with the hospitals, and they were able to get us samples from people that were currently being treated for COVID-19. We got the cheek swabs from them, and then what we ended up doing is training the dogs to recognize the smell of the cheek swab first," Overton said. (Screengrab image)

After that, the dogs were introduced to the smell of a person's saliva without COVID. "And we got the dogs to discriminate between the smell of somebody infected versus not infected with an astonishing accuracy rate," he said.

Roushia said, "It's just remarkable how sensitive their olfactory capabilities are and their ability to find this stuff. It's north of 95 percent accurate."

Andrew Kasecamp is in charge of training and education. He says he was very skeptical at first that dogs could be trained to detect COVID. "I said, 'There's no way. There's no way; I've done this a long time. I do not believe that it's possible.' And I'm kind of glad that they proved me wrong. Watching them actually go out and have the accuracy that they have is, it's astounding," Kasecamp said.

One of the primary benefits for using dogs to detect COVID is speed. Staff at American K-9 Interdiction say a dog can screen 30 to 40 people in less than a minute compared to the 15 minutes it takes to get the results back on just one rapid antigen test.

Kasecamp and his three-year-old Dutch Shepherd, Pashka, demonstrated how it works.

The COVID sample is placed behind a small filter in a cone-shaped funnel. The dog sticks his nose into each funnel to sniff the sample, but the filter prevents the dog from being able to put his nose all the way in and grab the sample. What it also does is it focuses that odor right inside the edge of the funnel. If it's a positive sample, the dog alerts the handler by sitting in front of that particular funnel. Otherwise, he'll keep on going. 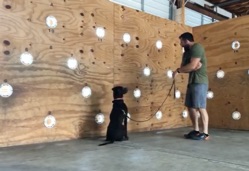 For our demonstration, Overton used a neutral odor that was used to train the dogs in the initial training, not an actual virus. Pashka alerts by sitting down in front of the target tube. (Screengrab image)

"If this were a real-world situation," Overton explained, "the dogs would come in here, each tube system would be labeled, so that we know whose sample is which one with our bar code system that we have in our app. They would come in here; if the dog indicates on this one, then this tube gets flagged as this was one of the 'hot' tubes."

Overton believes the dogs are a match for searching large groups of people.

"So anywhere where there's large crowds of people in close proximity to each other—cruise ships, stadiums, concert venues, schools, hospitals—anywhere, even the airlines—any of those applications would be perfect for something like this, to be able to do rapid screening at a very, very fast rate," he said.

Roushia says he prays over the dogs constantly and relies on Divine intervention.

"I ask for that knowledge, wisdom, and discernment on a daily basis and then just trust the prompting of the Holy Spirit. Go find that quiet space—the world's loud, and God likes to whisper. And if He tells me, 'Go forward with it,' I do. And if He speaks to my heart and says, 'Don't do that,' then I don't." Subscribe for free to Breaking Christian News here

And he adds that at the end of the day, his work is all for God's glory.