'Parents Roar' at Disney HQ in Rally against Company's Woke Politics: 'Cancel Disney' and 'Refuse to Accept the Idea That Corporations [Can] Push Woke Politics on Our Children'

"We've got to take action, so I am commissioning and asking all of you to not renew your Disneyland account. We will not go back. They will not get our money. They will not get our time. We will not support something that's going to come against our children ... Stand with me! I want you to end your account. I want you to write emails. I want you to cancel Disney, in the name of Jesus ... Pray for Disney to have a change of heart ... Remember your God-given role as a parent to instruct your children in the ways of the Lord..." -Sean Feucht, Hold the Line 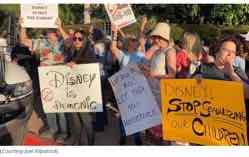 [CharismaNews.com] In what may have been the happiest protest on earth, more than 500 parents and protesters gathered in front of Walt Disney Studios in Burbank on Wednesday at 6 p.m. to speak loudly against what they say is the company's agenda to sexualize young children and groom them into deviant lifestyles and relationships. Organized by Sean Feucht and his Hold the Line team, the rally provided a platform for parents and others to stand up against what they see as an anti-family agenda. (Screengrab image: via Charisma /original image credit: Joel Kilpatrick)

People from various parts of Southern California began arriving at Disney headquarters' front gate in a continuous stream before 5 p.m. Many carried signs, some bullhorns, and some stood and observed departing Disney employees, who sat in their cars and looked straight ahead until the light turned green and they could pull away. Eventually, guards in the Disney complex shut the front gate and redirected employees in another direction.

Among the first to arrive at the gates were Scott and Frances Marshall from Lomita, a city in greater Los Angeles. Frances held a sign that read, "Boycott Disney, Support Parental Rights."

"I'm here for my children and my grandkids," she said. "Our rights are being taken away as parents."

"'Do not love the world or the things of this world,'" he said. "A lot of times, Believers have been distracted by entertainment. Now we're seeing [entertainment companies] being aggressive in how they influence our kids. ... I think we're at a crossroads. It's sad that Disney feels they can't be neutral. They put themselves in a real bad situation because I don't think they're going to win either way. But God calls us to stand up for righteousness and holiness, and that's what we're going to do as Believers."

Nearby, Mary Corran, 29, crossed busy Alameda Avenue carrying a handmade sign—reading, "If this is where the company is headed, count me out! Dis-Needs to stop"—which was later pointed out by Feucht from the stage. Corran is single and childless, but drove more than three hours from downtown San Diego to participate.

"No effort is too great to stand for our kids," she said as protesters continued to arrive. "California—people just write it off, but I think God can use the hardest and darkest places to show off His glory. That's why I'm honored to be in California and really encouraged by everyone else here."

Parents Cody and Hayley Herrick came from Thousand Oaks with their three kids, one in a stroller and two holding handmade signs which together read, "Let Kids Be Kids."

"We love Disney movies. We grew up watching them," Cody said. "Then it got to this point where they're pushing this agenda and they won't stop. We had Disney Plus and we decided to cancel it and come out here and support our side of the message, and tell them we don't like what they're doing."

Feucht's team says it didn't pick a fight with Disney—Disney did by strongly opposing legislation aimed at keeping sexuality out of early grade-school classrooms in Florida. The revival-and-resistance movement decided over the weekend to hold essentially a pop-up concert on a flatbed truck in front of the once-beloved media company's headquarters. Hold the Line was contacted by the Burbank Police Department in advance to coordinate efforts and ensure people's safety, especially from traffic.

Leading a rally from the back of a truck was a first for the ministry, which typically employs a fixed stage. When the flatbed truck holding sound equipment rolled up to the curb near Disney Studios' front gate, the scene quickly transformed into a rally and prayer meeting lasting more than an hour. Resembling Feucht's Let Us Worship concerts, the event—aimed at civic engagement and cultural confrontation—began with musical worship and featured a number of speakers who addressed the crowd for a few minutes each. Far overhead, a helicopter—possibly belonging to a news station—circled constantly.

Feucht, on a bullhorn, led chants of "Boycott Disney!" and "No more groomers!" Pastor Rob McCoy of GodSpeak Calvary Chapel church in Newbury Park, told the crowd, "They are not entertaining our children; they are indoctrinating them. What was once a mainstay in American culture has been taken over by the woke culture, and now if they want to mess with our kids—you've gone too far. We're here today to proclaim that our children are off-limits."

Feucht then officially welcomed everyone.

The band and worshippers opened with Bethel Music's "Raise a Hallelujah," a thumping call to action. As the music continued, Feucht exhorted the crowd: "Today, our battle isn't against flesh and blood. It's not against woke corporations. It's against powers and principalities that want to pervert our children. ... If parents in America would realize the power and the authority that they have, they could shift the economy of this place in one day."

On Alameda Avenue, thousands of commuters streamed by, and drivers of all races honked in support of the protesters, who lofted their signs in the late afternoon sunlight. Jay Koopman, Feucht's co-leader of Let Us Worship and Hold the Line, lives in Orange County, home of Disneyland, and spoke about being an annual passholder and going to the park frequently with his family and church groups.

Next, a longtime Disneyland cast member, whose name was not given from the stage, addressed the people.

"Thank you for being here. Thank you for standing up," she said. "This message is a message of boldness. This is a message of courage. Being here in California in front of Walt Disney Company takes courage. I'm a cast member here, for Disneyland. I've been with them for quite a long time and it's gotten very political, and it's gotten very hard to be who you are. It's gotten very hard to be someone who has conservative values ... Someone who believes that it's OK to stand up for righteousness. ... My message today is for those, like me, who are cast members, who are in the middle of that harvest field, because that's what that place is. I've worked for Disney since 2001, and it has always been a harvest field, and that field is ripe for harvest."

"There is an entire army of people in Disney that love God, that love America, that don't want this woke crap. You've got to understand that," he said. "God has people hidden in this place. So we're going to believe. There are open letters circulating around Disney with people that said, 'We've had enough,' and I'm believing there's going to be so much pressure that they're going to change their mind. They're going to feel it in their earnings report, and any politician that stands behind this nonsense is going to feel it in November at the ballot box."

He exhorted listeners to "Pray for Disney to have a change of heart," "Remember your God-given role as a parent to instruct your children in the ways of the Lord," and "Refuse to accept the idea that corporations have the right to push woke politics on our children."

After the event, Koopman told Charisma that the team hopes for a good outcome to the present conflict with what they view as an increasingly errant corporation.

"The best thing that could happen is Disney hears our prayer and our heart to protect our kids and let them be innocent," Koopman said. "Let kids be kids. Don't allow any of this sexualization stuff. Our heart is that Disney will hear the hearts of American people, and I think the majority of the American people agree with us that Disney should stay pure and innocent for children." Subscribe for free to Breaking Christian News here

Joel Kilpatrick is a writer living in Southern California who has authored or ghostwritten dozens of books. Kilpatrick, who served as associate editor of the Pentecostal Evangel in the 1990s, is also a credentialed Assemblies of God minister.