'Whose Children Are They': Documentary Exposes Critical Race Theory as 'Radical Indoctrination Being Hidden From Parents'; in Theaters March 14th

"Parents need to be aware that critical race theory is un-American and that it is dividing our children in ways that are unacceptable. It is teaching them to become conscious of race. And that is very dangerous. It runs counter to our civil rights laws, the Civil Rights Act of 1964 and the amendments that were made to it in 1972." -Dr. Carol Swain

[CNSNews.com] A new documentary that will open in select theaters on March 14 exposes critical race theory (CRT) as "a thinly-disguised Marxist tool to divide people, create identity groups and bring down America through disunity," according to Fathom Events, one of the top film distributors in the US and abroad, owned by AMC Entertainment, Regal Cinemas, and Cinemark Holdings. (Screengrab image)

"Parents need to be aware that critical race theory is un-American and that it is dividing our children in ways that are unacceptable," says Dr. Carol Swain, one of the many experts interviewed in the film. "It is teaching them to become conscious of race. And that is very dangerous. It runs counter to our civil rights laws, the Civil Rights Act of 1964 and the amendments that were made to it in 1972."

In the documentary, Swain, who is black, describes how white liberals often try to "educate" her on race. 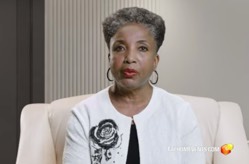 "I've had several encounters with woke, young white progressives, bless their hearts—and I say that in the Southern sense—who have tried to teach me about poverty and teach me how to be sensitive to racial and ethnic minorities and other concerns," says Swain. "And, you know, I sort of smile because I know that they're innocent. They don't know any better." (Screengrab image)

The documentary exposes the Marxist elements of CRT, how it divides people by race and gender in ways that mirror classical Marxism that divides people by class. The point is to generate animosity and racial hatred and spark racial conflicts. It is a revolutionary ideology that seeks to overthrow America's constitutional form of government.

Dr. Robert Woodson, founder of the Woodson Center, says in the film, "You can't use racism to fight racism. One of the worst things that happened in the Obama administration was the Department of Education giving a directive to schools that it must end the discrimination of students by discipline because a disproportionate number of black students were being expelled from school as compared to white students."

As for CRT's anti-discipline policies in the schools, Dr. Swain said, "With 'restorative justice' in the classroom, it made it harder for teachers to discipline students. It made it almost impossible to suspend children who were dangerous and truly unruly. There were teacher injuries, as well as situations where the children... were so intimidated by the bullies... that they themselves had higher absenteeism."

Parents United America Founder and President Deborah Flora, says "Whose Children Are They? is designed to drag into the light the radical indoctrination that is being hidden from parents."

"In our own school district, CRT was being introduced under the euphemistic term Educational Equity," she added. "It is the opposite of Equal Opportunity which is instead what truly helps children from every walk of life flourish."

In addition to the racial division and animosity the film exposes, "Whose Children Are They?" details how many of the public schools are pushing a radical sexual agenda on children.

"They're teaching these kids X-rated sex acts," states one of the experts in the documentary.

The movie's production team includes Deborah Flora and Jonathan Flora, the latter an award-winning writer; Rebecca Friedrichs, founder of For Kids and Country; and Gerald Molen, the Academy Award-winning producer of Schindler's List and other blockbusters including Jurassic Park, Minority Report, Catch Me If You Can, Amistad, Twister and Rain Man.

"Our documentary informs people of exactly how dangerous and anti-American our schools have become," Rebecca Friedrichs said. "And it teaches them how to stand with good teachers—against the unions who promote CRT and other corrupting ideologies—for the sake of our kids and our country." Subscribe for free to Breaking Christian News here