"I think if you look at what's been done in some of these other states—I mean, when you start talking about 15 weeks where you have really serious pain and heartbeats and all this stuff—having protections I think is something that makes a lot of sense." -Gov Ron DeSantis 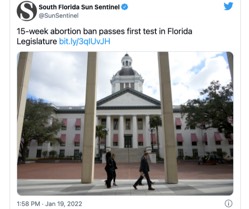 (Tallahassee, FL) — [LifeSiteNews.com] Florida's Republican-dominated legislature advanced a bill Wednesday which would ban almost all abortions in the state after 15 weeks gestation. The bill mirrors a similar law in Mississippi which is the subject of the much-anticipated Dobbs v. Jackson Women's Health Organization case currently on the docket of the US Supreme Court. (Screengrab image)

A committee of Florida's House of Representatives advanced the measure, HB 5, on January 19 with a party-line 12-6 vote, giving the bill its first legislative go-ahead. The proposed legislation will now face two more committees in the House. A companion bill, SB 146, has been filed in the Senate.

Florida's Republican Gov. Ron DeSantis, who is up for re-election this year and potentially a strong contender for the US presidency in 2024, has already signaled he will support legislation limiting abortion in the Sunshine State.

Earlier this month, DeSantis told reporters "There's a lot of pro-life legislation" in the works in the Florida legislature, and that "we're going to be welcoming it."

Asked specifically about a ban on abortions after 15 weeks, DeSantis said such a measure "makes a lot of sense"... Subscribe for free to Breaking Christian News here