"My encouragement to you todayâ¦ HOLD THE LINE friends. God is with you! AND SO ARE WE!!!! He will open greater doors than man can never shut!! 'If God is for us, who can be against us?'" -Sean Feucht 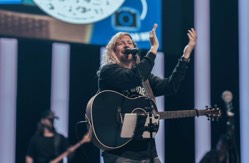 [CBN News] Worship leader Sean Feucht is thanking God for getting a better book deal after saying a different book publisher, Harper Collins, had canceled his book due to his political views. (Image: Facebook /via CBN News)

"God is bigger than cancel culture," he announced in a Facebook video. "We are here as a family about to celebrate this historic moment. I'm signing my biggest book deal ever!"

Last week, Feucht said he lost a book deal with Harper Collins, one of the world's leading publishers, over his political stance.

He told CBN News the move was a "blatant target on conservative Christians."

"They called me and said they were canceling it and that they had a couple of staffers in the marketing department who refused to market it because of my political views," he explained.

A Harper Collins spokesperson told CBN News, "We did not have a signed contract. On background for clarification, the project was being considered by Thomas Nelson, a publishing group of HarperCollins Christian Publishing. Not HarperCollins Publishers."

Feucht's new book Bold: Moving Forward in Faith Not Fear, will be released under Regnery, a politically conservative book publisher.

"I'm writing this because I know that it is a needed message for this hour," Feucht continued. "The fact that we are getting so much push back... validates that we need it."

The Let Us Worship founder announced that he negotiated better terms with his new publisher and took to social media Wednesday to hit back at Harper Collins.

"I want to dedicate this moment to Harper Collins," he announced in a Facebook video. "I want to thank them because without their resistance to cancel this book I would not have this renewed fire to really get this message out."

In another post, Feucht thanked his supporters and encouraged them to continue to stand up for their beliefs.

"This is more than just a book deal to me," the 38-year-old wrote. "It's about standing up against the woke mob seeking to silence conservative Christians for our values and beliefs."

"This is about us all standing together and knowing we are not alone in the fight," the worship leader continued. "So many are being targeted, intimidated, threatened, fired, and cancelled for simple (sic.) refusing to back down from what is right.

"My encouragement to you today... HOLD THE LINE friends," he added. "God is with you! AND SO ARE WE!!!! He will open greater doors than man can never shut!! 'If God is for us, who can be against us?' Subscribe for free to Breaking Christian News here