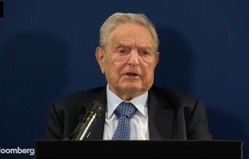 [Breitbart.com] Left-wing billionaire and Democrat donor George Soros has turned his attention in recent years to local races for prosecutor, using his money to elect "progressives" who push "criminal justice reform" and support the Black Lives Matter movement. The rise of these Soros-backed prosecutors has coincided with a massive surge in murder and crime in many Democrat-run cities, including many where these prosecutors have implemented radical policies toward policing and incarceration... Subscribe for free to Breaking Christian News here Click here to read. (Screengrab image)