"This case is so much bigger than a flag. It really involves whether the government can open a forum for a lot of different voices and then shut the door for Christian viewpoints." -Mat Staver, founder and chairman of Liberty Counsel. 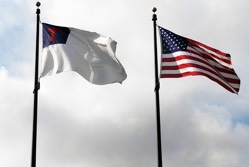 [CBN News] Outside of Boston City Hall stand three flag poles. One of them flies the US flag, another, the flag of the Commonwealth of Massachusetts, and the third flagpole is intended to celebrate other countries, cultures, and causes. (Image: Pixabay)

Over a 12-year period, the city of Boston received nearly 300 applications for that third flagpole. They approved all of them, except one.

"These include flags of individuals, say for example, Metro Credit Union, gay pride, Boston Pride, other causes, in addition to that, they also had individuals who would raise flags of their countries," said Mat Staver, founder and chairman of Liberty Counsel.

The sole rejection came in 2017 when an organization called Camp Constitution applied to raise a "Christian" flag and hold a one-hour ceremony in honor of Constitution Day.

"What they said was, while this was the first flag of a religious nature, they said that it would have been allowed to fly had it not been called 'Christian.' So the same flag had no problem to the city as long as you didn't call it something religious," Staver told CBN News.

Camp Constitution Director, Hal Shurtleff, sued the city, and now his case will be heard by the Supreme Court.

"This case is so much bigger than a flag. It really involves whether the government can open a forum for a lot of different voices and then shut the door for Christian viewpoints," Staver, the camp's counsel, explained.

Despite the fact that the city itself has referred to the flagpole as a "public forum," its attorneys are expected to argue this is a case of government speech. Meaning, the flagpole speaks for the city of Boston.

"That defies logic because Boston allows two competing Chinese organizations or individual groups to put opposite flags, both of the Chinese community, one pro-China, one anti-China, the other one pro-communism, the other one anti-communism," said Staver.

And the case has attracted some unlikely allies.

The ACLU, a group normally against religious displays on government property, filed a brief supporting Camp Constitution. The Biden administration also supports their side.

Staver believes this case will have significant implications on private free speech. Subscribe for free to Breaking Christian News here