"...Such action is more likely to ensure a just and favorable ruling, compared to that which could be expected from a pro-abortion federal district judge, to whom the abortion industry asked to send the case." -Texas Right to Life 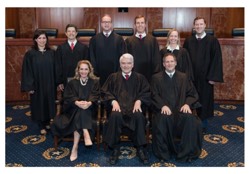 [LiveAction.org] The Texas Heartbeat Act remains in effect as the US Court of Appeals for the Fifth Circuit has sent the case of Whole Woman's Health v. Jackson to the Texas Supreme Court. (Screengrab image)

"People in Texas have been stripped of their constitutional right to abortion for more than four months now—and pregnant Texans are needlessly suffering with no end in sight," alleged Julie Murray, an attorney with Planned Parenthood Federation of America.

However, Texas Right to Life said, "This is great news for Texas because such action is more likely to ensure a just and favorable ruling, compared to that which could be expected from a pro-abortion federal district judge, to whom the abortion industry asked to send the case. Beyond this, sending the lawsuit to the Supreme Court of Texas is appropriate because the only defendants left in the case are state agencies."

The Heartbeat Act allows private citizens, not state officials, to enforce the ban via lawsuits against the abortionist and anyone who assists in the abortion other than the preborn child's mother. The Supreme Court of the United States ruled in December that the federal lawsuit by abortionists challenging the law can proceed, but only against state health officials, and the case was remanded to the Fifth Circuit.

The Fifth Circuit's 2 to 1 decision on Monday will temporarily transfer the case to the state Supreme Court, according to The Washington Post, which could keep the law in effect for months. The decision states, "Here, there is a possibility that federal courts could declare S.B. 8 constitutionally infirm even though our conclusions might be based entirely on a faulty understanding of Texas law. To avert creating needless friction with a coequal sovereign in our federal system, this court reasonably seeks the Texas Supreme Court's final word on the matter."