Virginia's New Governor Youngkin Off to Quick Start with These Executive Orders, Including Ban on Critical Race Theory

"To be clear the spirit of Virginia is not a spirit that is rested in government telling us what is best for us... but rather reflecting the will of the people, defending and protecting." -Gov. Glenn Youngkin 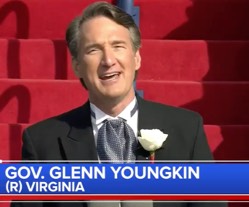 (Richmond, VA) — [CBN News] Thousands of Virginians endured the cold on Saturday to see their new governor sworn in. Republican Glenn Youngkin took the oath here at the state capitol, and the new governor is already off to a brisk start. (Screengrab image)

A lot of people in the crowd told CBN News they voted for Youngkin because he is promising change for Virginia—a process he said would start on day 1.

True to his word, Youngkin fired off nearly a dozen executive orders soon after taking office on Saturday—including a ban on critical race theory in public education, ending mask mandates in schools, ending a vaccine mandate for state workers, terminating the Virginia parole board, and establishing a commission to combat antisemitism.

The day began with a jubilant crowd cheering Virginia's 74th governor. Gov. Youngkin told his supporters, "My fellow Virginians, the spirit of Virginia is alive and well."

He promised to restore trust in government and power to the people. "To be clear the spirit of Virginia is not a spirit that is rested in government telling us what is best for us... but rather reflecting the will of the people, defending and protecting."

Two other newly elected Republicans, Lt. Governor Winsome Sears and Attorney General Jason Miyares, made history. Sears is the first woman of color and Miyares is the first Latino to hold statewide office.

Youngkin, a 55-year-old former business executive, is a first-time politician who surprised many by turning Virginia from blue to red with the help of independent voters and even some Democrats. Now, he's calling on Virginians in both parties to put differences aside.

"We must bind the wounds of division, restore trust, find common cause for the common good and strengthen the spirit of Virginia," he said.

Youngkin is a devout Christian who won the evangelical vote by nearly 90%. Voter Shirley Green told us, "It's a red wave. It's the Blood. God is doing a transformation, starting with the state of Virginia."

Youngkin mobilized voters on issues like education, insisting that students be in school five days a week and that the classroom is no place for politics.

Some supporters drove through the night to see him sworn in. Cassandra Mullins said, "We actually drove six hours to get here. Just be able to see... we are so excited."

They have high hopes for the future. Voter Andrew Crider said, "Virginia collected the highest share of revenue over the past month. Which is great. But I'd like to see some of that back in my pocket if that's not too selfish."

Tammy Bartlett, another Youngkin voter, said, "I'm hoping that Glenn Youngkin can correct some of the wrongs that have happened. Better support for police. Better support for education and put Virginia on the path to success." Subscribe for free to Breaking Christian News here