Meet Actor Ray Romano's Brother: The Ex-NYPD Cop Who Embarked on an Investigation to Prove Jesus' Death and Resurrection

"I need[ed] to see an unbiased investigation and unbiased source â¦ [on] whether Jesus Christ lived." -Richard Romano 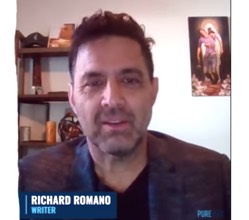 [Faithwire.com] Actor Ray Romano has long entertained the masses through shows like "Everybody Loves Raymond" and "Parenthood," but did you know his brother, Richard, is also a talented screenwriter? (Screengrab image)

Richard Romano, in many ways, took a divergent path from his famed brother. A 20-year veteran of the New York Police Department, Romano became a cop because he wanted to make a positive impact in society.

"I wanted to be a police officer and help people," he said during an interview with Pure Flix.

And while Romano proudly served as a New York police officer, the harrowing experience taught him a lot along the way. There were some truly difficult lessons that deeply impacted him.

"I was kind of like a naive kid ... when I got in there, I was in for a shock in the sense that just seeing the sometimes dark side of humanity and the sadness and the pain of people," he said. "It was an adjustment for me."

Eventually, Romano came to a place on his journey where he started to doubt his faith—a real-life story that serves as the basis of "The Investigator," a movie he wrote about a veteran police detective who becomes a criminal justice teacher and baseball coach at a local high school before embarking on the "most important investigation of his life"... Subscribe for free to Breaking Christian News here