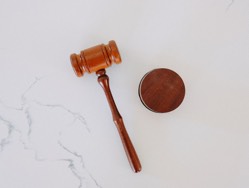 The 15-year-old boy also was ordered to be placed on the sex offender registry for life at a hearing in the Loudoun County Juvenile and Domestic Relations Court, a step Judge Pamela Brooks said she had never previously ordered in a juvenile case.

The defendant reportedly cried and hung his head on the table after the judge read his sentence.

Brooks said she felt compelled to do so after reviewing psychosexual and psychological evaluations of the boy conducted after he was found guilty of the assaults.

"Young man, you need a lot of help," the judge said.

The judge's decision to send the boy to a residential treatment facility rather than juvenile jail came after both victims and their families said they wanted the boy to get help. The judge called that gesture by the families "very brave and generous."

Before he was sentenced, the boy apologized to the girls and their families. He said he hadn't realized how he had hurt them until he heard their statements.

"I will never hurt anyone like this again," he said.

As CBN News reported, parents were angered after finding out the boy was involved in multiple assaults. After the first one occurred in a school bathroom at Stone Bridge High School in May 2021, the boy was allowed to shift over to nearby Broad Run High School while he awaited trial in juvenile court. The second assault occurred in a Broad Run classroom last October.

Before the attack at Stone Bridge, the teenager who was 14 at the time, entered the girls' bathroom wearing a skirt, according to news reports. The case became embroiled in a debate over extending protections to transgender students in schools.

The boy's sexuality or gender was not an issue at the sentencing hearing, the Associated Press reported.

Despite making claims to the contrary, Loudoun County Superintendent Scott Ziegler was previously informed about an alleged sexual assault that took place on May 28 in a high school bathroom, CBN's Faithwire reported in October.

Ziegler sent out an email on May 28, at 4:09 p.m., informing the school board of "an incident that occurred" at Stone Bridge High School. In the message, he wrote, "This afternoon, a female student alleged that a male student sexually assaulted her in the restroom," according to a report from WTOP-TV, a local news station.

Then Ziegler said at a June 22 school board meeting there was no record of any sexual assaults in the bathroom. But his May 28th email reveals he and the board would have been aware of the incident during the summer meeting when parents raised serious concerns about allowing students to use whichever restrooms correlate with their chosen gender identities.

Several parents said such a policy would endanger children's safety. In response, school board member Beth Barts, who has since resigned, asked Ziegler if there were any sexual assaults occurring regularly in school bathrooms.

"The predator transgender student or person simply does not exist," the superintendent said at the time. "We don't have any record of assault occurring in our restrooms."

Ziegler later apologized for his "misleading" claim, telling reporters he thought the question was in reference to assaults specifically involving transgender-identities kids.

As CBN's Faithwire reported, the family of the alleged victim plans to file a civil lawsuit against the school. The attorney representing them, Bill Stanley, said Ziegler's apology indicates the LCPS administration "failed to provide the safe environment" for the young teenage girl.

Virginia Gov.-elect Glenn Youngkin called for an investigation of the school board's response to the assaults during his successful campaign last year, and Attorney General-elect Jason Miyares has said he plans to conduct that probe. Subscribe for free to Breaking Christian News here