"The federal government has no business dictating the private and personal health care decisions of tens of millions of Americans, nor does it have the authority to coerce employers into collecting protected health care data on their employees..." -Heritage Foundation President Kevin Roberts 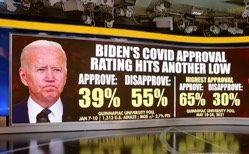 Trump issued a statement saying, "The Supreme Court has spoken, confirming what we all knew: Biden's disastrous mandates are unconstitutional. Biden promised to shut down the virus, not the economy but he has failed miserably on both—and mandates would have further destroyed the economy. We are proud of the Supreme Court for not backing down. No mandates!"

"We're pleased that the Supreme Court is preventing this unconstitutional mandate from going into effect, but we hope the court will strike it down to avoid a Constitutional crisis," Shackelford said. "...Biden is not a king. He cannot federalize the nation's workforce and force employers to violate the conscience rights of their employees. We will continue to fight on behalf of our clients and the American people to protect them from this illegal, dangerous expansion of government power."

"The federal government has no business dictating the private and personal health care decisions of tens of millions of Americans, nor does it have the authority to coerce employers into collecting protected health care data on their employees," Roberts said. "By striking down the Biden regime's unlawful COVID-19 vaccine mandate, the Supreme Court has signaled its agreement with this basic tenet of a well-functioning and free society."

"This mandate has never been about public health. It has always been a fig leaf for ...Biden's excuse to increase government control of the everyday lives of Americans," the statement continued. "The court's rebuke of this overreach is certainly welcome. However, Americans who cherish our Constitution and the rule of law have a great deal of work left to do in pushing back against the Biden regime's radical response to the pandemic, whether it be disastrous public health policy, extreme social spending proposals like 'Build Back Better,' or the assault on the integrity of our elections through legislation that would undo basic electoral safeguards like voter ID in all 50 states."

"The Supreme Court correctly concluded that the federal administrative state has no authority to treat unvaccinated employees like workplace hazards and to compel employers to carry out the government's unlawful national vaccine mandate," Bangert said in a statement.

"The Biden administration's mandate would have a profoundly negative effect on those employers and the 80 million American workers who are affected, and that is why the Supreme Court was right to immediately halt its enforcement. Sadly, mandating vaccines through an OSHA emergency rule is yet another example of government overreach. Now that the Supreme Court has stayed the mandate, we look forward to pressing forward with our substantive litigation on behalf of the clients we represent in the consolidated cases challenging the mandate at the 6th Circuit," he said. Subscribe for free to Breaking Christian News here