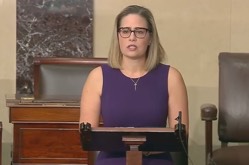 [FoxNews.com] Sen. Kyrsten Sinema said Thursday that she will not vote to weaken the Senate's 60-vote filibuster threshold, bucking her party leaders yet again and dealing a major blow to Democrats' election reform effort ... "But what is the legislative filibuster, other than a tool that requires new federal policy to be broadly supported by senators, representing the broader cross-section of Americans... Demands to eliminate this threshold from whichever party holds the fleeting majority amount to a group of people separated on two sides of a canyon, shouting that solution to their colleagues"... Subscribe for free to Breaking Christian News here Click here to read. (Screengrab image)