The Radical Covid-19 'Rules' Being Proposed in Oregon, and Why Her Residents Need to Speak Out

"I cannot say this forcefully enough: This is literally the end of human liberty in the West if this plan unfolds as plannedâ¦ It has the power to turn off your life, or to turn on your life, to let you engage in society or be marginalizedâ¦ The CCP can find any dissident in five minutes, and that can happen here literally within months." -Naomi Wolf, author of The End Of America 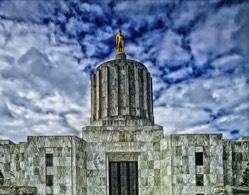 [IFAPray.org] Lord, You created us with free will. We pray against the forced vaccination of Oregon's teachers and healthcare workers and against the dividing of society by vaccine passports. We pray these initiatives will be blocked before they're put into place, inspiring other states to override free will. Give wisdom to our leaders, and may they look at real science and not politicized objectives that sound scientific. (Image: Pixabay)

I grew up in Oregon and know first hand how conservatives have been frustrated by the progressive leadership consistently voted into office by city dwellers. Now Oregonians are facing more polarizing tactics. What is happening in Oregon should be concerning to all Americans. The Oregon Health Authority (OHA) proposed four new initiatives for consideration and the comment period is open now.

Three of the initiatives started as temporary rules, which only last 180 days. According to Jonathan Modie, Lead Communications Officer of OHA's Oregon Public Health Division, "OHA has rulemaking authority and under Oregon law, OHA is charged with investigating and controlling communicable diseases and directing matters concerning the preservation of life and health of people ... across the state." OHA is proposing they make these initiatives permanent and expand on them.

According to OHA's mask mandate proposal, those who forget their mask will face "up to $500 per person per day for non-compliance with the rule." And business owners will face the same fines if they don't enforce the rule. Modie clarified, "A person could be fined multiple times for multiple violations in a day." They've set up a phone number and email address for people to report offenders.

Cloth masks are proving ineffective against the omicron variant, but the CDC "recommends that specially labeled 'surgical' N95 respirators should be prioritized for healthcare personnel." A source who wishes to remain anonymous, served on the covid task force for the Joint Chiefs of Staff. He was in the room early in 2020 when Dr. Anthony Fauci, White House Chief Medical Advisor, compared wearing masks to protect against a virus to using chain-link fences to protect against mosquitos. Many Oregonians I've spoken with are frustrated to hear about potential fines for not wearing something that's not effective according to the CDC and Dr. Fauci.

For Oregon schools and healthcare facilities, not only will masks be required of everyone in their buildings, but all teachers and healthcare workers will be forced to enter the largest drug experiment in human history by getting fully vaccinated. No one who is unvaccinated will be considered for employment, and those now employed will need to choose between risking their health and getting paid.

Both schools and healthcare facilities will face daily fines of $500 for non-compliance.

Larry Smith, a teacher in Southern Oregon since 1966, was shocked to discover the new initiative would also apply to the 465 private schools in Oregon. The proposal said many of them employ fewer than 50 persons. In an interview you can see by clicking here, Smith said he knows of a number of teachers who will be affected in the schools where he's worked as a substitute teacher in recent years.

The OHA healthcare facilities proposal states, "In addition to the imposition of civil penalties ... a violation of this rule may also be grounds for a licensing action..."

Though all three proposals mention studies which indicate masking and vaccinations help slow the spread of covid, they don't take into account the fact that accordingto 144 research studies those who have already recovered from covid are 6.7 to 27 percent less likely to get covid again than someone who is vaccinated.

Also, a Harvard study shows covid rates increase with vaccinations, and in Gibraltar, which has a 99% covid vaccination compliance rate, covid cases have risen by 2,500% since June 1, 2021.

Dr. Robert Malone, who invented the mRNA technology used in some coronavirus vaccines, spoke about the head of Indianapolis-based insurance company OneAmerica, who said the death rate is up a stunning 40% from pre-pandemic levels among working-age people, and most of the claims for deaths being filed are not classified as covid deaths. At the same time, the company is seeing an "uptick" in disability claims, saying at first it was short-term disability claims, and now the increase is in long-term disability claims. The number of hospitalizations in the state is now higher than before the covid vaccine was introduced a year ago, and in fact is higher than it's been in the past five years.

More than 7,200 physicians have signed a declaration condemning policy-makers of "crimes against humanity" because of their "one size fits all" approach, which is bringing unnecessary injury and death.

According to www.OpenVAERS.com there are a million plus reports of covid vaccine adverse events, including more than 21,000 vaccine deaths. The site says that because it's a voluntary reporting system it has been estimated to represent only 1% of vaccine injuries. I asked Oregon officials about these statistics. Modie is unclear who is liable for vaccine related injury and death when the OHA is forcing employers to force their workers to take it. He said to reach out to the Oregon Department of Justice, and Kristina Edmunson, their Communications Director said, "We represent OHA and other state agencies, so as their legal counsel we are not able to provide you with legal advice."

All of this risk is to avoid something that—in the omicron variant—is being compared to a common cold.

The proposals for schools and healthcare facilities both allow for medical and religious exemptions, which is good, since all three approved covid vaccines currently available were developed and tested using fetal cell lines, which originated from aborted babies, and the Pfizer vaccine was developed by a cell line which had to have been extracted by removing the kidneys without anesthesia of children who were already born. 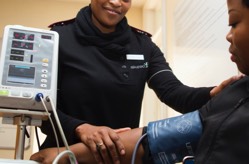 Based on a previous temporary rule set by Oregon governor Kate Brown, some healthcare facilities have already been firing their first responders because they wouldn't take the jab. Jamie Guastaferro, a nurse of 26 years, working at a hospital in Oregon, said in an interview you can see by clicking here, "I never believed, that they would—in the middle of a healthcare crisis—fire a bunch of nurses." She was refused a religious exemption. Then it was brought to the administration's attention that there was inequity in which religious exemptions were being accepted. Guastaferro knows a married couple who had filled out their forms in a very similar manner. Guastaferro said, "He was given an exemption and she was not." Apparently the nursing shortage prompted an invitation for Guastaferro to reapply for a religious exemption, but because the ruling was delayed she was put on unpaid leave for one day before the exemption was approved, and she was able to return to work. She must wear a mask at all times, but that's fine with her since she works mostly in the operating room. She heard of other hospitals that interpret religious exemption as allowing 90 days of unpaid leave, but if you're not fully vaccinated by the end of the window you're fired.

Liberty Counsel has put together resources for requesting a religious exemption.

Now is the time to speak out

Modie said, "No decisions have been made on the proposed rules... Rules that go through the regular administrative process, with public input before the rule goes into effect, are called permanent rules."

Now is the time to make your voice heard.

During IFA's Pray with Others Live on January 4 Nancy Rife, while praying over similar laws being proposed in New York said, "If we don't use our voices now, we aren't going to have them." Judy McDonough, who hosts the program agreed: "That's part of being a citizen of this republic... We the people... have rights, and we have a voice, and fortunately our government has always given us a way to use that. We're not in communist China. We're not in Russia. This is America, and so that's why IFA is always going to ask you to pray and act."

Click the links below for information on how to submit your ideas to OHA regarding the following initiatives:

All hearings will be held over Microsoft Teams teleconferencing software or audio only by phone. Click the links above for information on how to receive the information for attending and contributing to each hearing.

Written comments for all OHA proposed rules are accepted until 5:00 PM on January 24, 2022 and should be sent to publichealth.rules@dhsoha.state.or.us.

Sadly it's too late to influence OHA's decision to introduce a vaccine passport, which they are calling a digital vaccine health-pass. That will be rolled out on a voluntary basis on March 8.

Naomi Wolf, author of The End Of America said, "I cannot say this forcefully enough: This is literally the end of human liberty in the West if this plan unfolds as planned..." She is the founding CEO of Daily Clout, which builds digital tools. She said, "It has the power to turn off your life, or to turn on your life, to let you engage in society or be marginalized... The CCP can find any dissident in five minutes, and that can happen here literally within months." Pray over this open door to restricted liberty.

Pray also that many turn to the Lord, the only Solution in these trying times. Pray for Revival and Awakening. Subscribe for free to Breaking Christian News here

Rich Swingle has taught and performed in 39 nations on six continents, mostly with his own one-man plays. He's also performed in more than forty film projects. He and his bride, Joyce Swingle, another contributing writer for IFA, now have 37 screen children. The Swingles live in New York City. www.RichDrama.com