"Women are not chess pieces in a political game. They are doctors, lawyers, engineers and already valuable members of our all-volunteer force. I applaud the removal of this unnecessary provision and am grateful to see reasonable minds come together to join me in resisting this effort." -Missouri Republican Rep. Vicky Hartzler 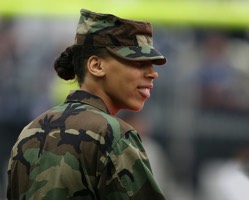 [CBN News] Women will not be required to register for the military draft after Congress finally dropped that provision from the National Defense Authorization Act on Monday. The Senate is likely to vote on this next week. (Image: Pixabay)

The defense bill initially stated that it would "modernize the Selective Service System" by requiring women ages 18 to 25 to sign up for mandatory enrollment, according to Politico.

An outline of the bill from the Democrat-controlled House Armed Service Committee indicates that the proposed legislation would "support the mobilization needs of the Department of Defense by including women if the all-volunteer model is no longer able to recruit enough people during a time of national crisis."

Republican leaders of the House and Senate Armed Services Committees Rep. Mike Rogers and Sen. Jim Inhofe strongly opposed the idea of including women in the draft.

Sen. Josh Hawley (R-MO) also pushed for an amendment to remove the measure from the Senate bill. Hawley tweeted that he "will continue to insist on a vote on the Senate floor to strike the provision" if it wasn't withdrawn from the final bill.

"Women are not chess pieces in a political game," Hartzler said. "They are doctors, lawyers, engineers and already valuable members of our all-volunteer force. I applaud the removal of this unnecessary provision and am grateful to see reasonable minds come together to join me in resisting this effort."

The US has not issued a draft since the Vietnam War, and military officials have repeatedly said they have no plans to move away from an all-volunteer force, Military.com explains.

Meanwhile, some have confused the notion of adding women to the draft as a strike against equality.

FRC Action, the legislative wing of the Family Research Council, pointed out, "Nothing could be further from the truth. There is simply no military or national security reason to require women to register for the Selective Service. It is unnecessary, would be dangerous, and would weaken the military's readiness, lethality, and unit cohesion. There are natural, physical differences between men and women, and studies show that combat roles (in which most draftees serve) are considerably more dangerous for women."

In August, a letter signed by nearly 70 lawmakers, religious leaders, retired military members, and various organizations was sent to Congress asking not to add women to the forced enlistment.

"There remains no justification for ill-considered legislation to 'Draft Our Daughters' for military service, creating future societal and political crises that undermine national defense at a time when America is in peril," the letter reads.

In 2016, 63 percent of Americans supported drafting women, whereas, 55 percent of men in the 2021 poll supported including women in the draft. Less than 40 percent of women supported their inclusion. Subscribe for free to Breaking Christian News here